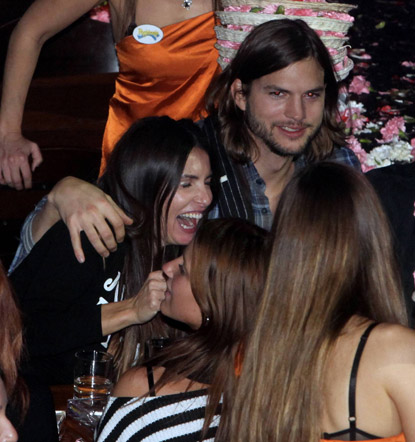 Following Ashton Kutcher and Demi Moore’s separation last year after cheating on her, Ashton was spotted in Athens with a Demi look-alike on Thursday night. Who is the mystery woman? Her name is Lorene Scafaria; she’s a 33 year old actress-director best known for her work on the 2008 film, Nick and Norah’s Infinite Playlist. The two were seen together at an Athens nightclub along with one of Ashton’s business partners.

Although Ashton’s rep insists that the two are “just friends,” they do look super duper friendly in the photos.

As seen in the photo above, Ashton has his arm around Lorene. The Two and a Half Men star threw flowers on the brunette beauty’s hair and she put a flower on his head after laughing hard (see photos below).

Although Ashton and Demi haven’t filed for divorce yet, Ashton is not wasting anytime hooking up with the ladies. He was also spotted in Berlin leaving a private loft party in a limo with three women, but entering a luxury apartment building with only one of them – yet another Demi look-alike.

What do you think of Ashton’s new naughty ways? Do you see the resemblance between Demi and Lorene? Do you think that Ashton and Lorene are more than just friends? 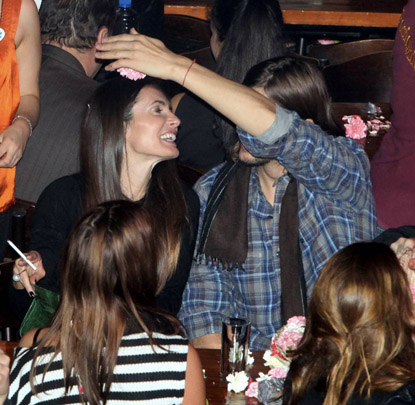 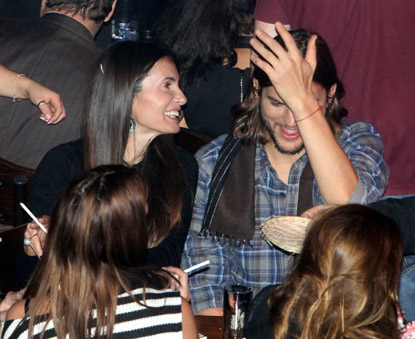