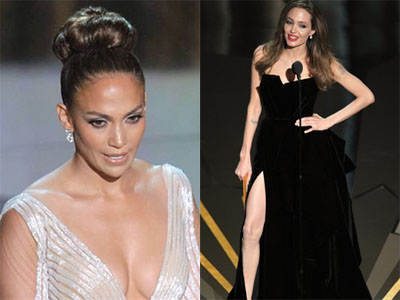 Yes, Angelina Jolie and Jennifer Lopez are finally having a Twitter showdown as to who has the more popular body part.

How did this start?

At the 84th Annual Academy Awards ceremony a few days ago, when Angelina arrived in a gown with a full-length slit, flirtatiously exposing her right leg. Less than an hour later, someone had already created a Twitter account for Angelina’s right leg, @AngiesRightLeg, with the following “Bio”: “I am Angelina Jolie’s right leg.”
By Monday morning, @AngiesRightLeg already had more than 15,500 followers.

It doesn’t stop here! As J Lo was presenting an award, she may or may not have had a wardrobe malfunction in which her nipple was partially exposed. Quicker than you can imagine, a Twitter account for J Lo’s nipple, @JLosNipple, was created with the subhead: “Did you see me?” followed by the nipple’s first tweet: “J Lo’s not to blame, I couldn’t breathe,” along with a picture of the supposed wardrobe malfunction.

Since no one’s quite sure if J Lo’s nipple showed or not, its Twitter account only had 2,500 followers by Monday morning.
It then tweeted: “The leg had much more airtime….I was stunted by network TV. Curse you Janet Jackson!” (Referring to Janet’s famous accidental nipple slip at the 2004 Super Bowl)

As for @AngiesRightLeg, it was oddly enough following only one other Twitter account, none other than @JLosNipple.

Follow @AngiesRightLeg and @JLosNipple on Twitter for a few laughs. Their tweets are hilarious. And while you’re at it, follow BeirutNightLife as well on @BeirutNightLife to stay updated on all our latest posts.