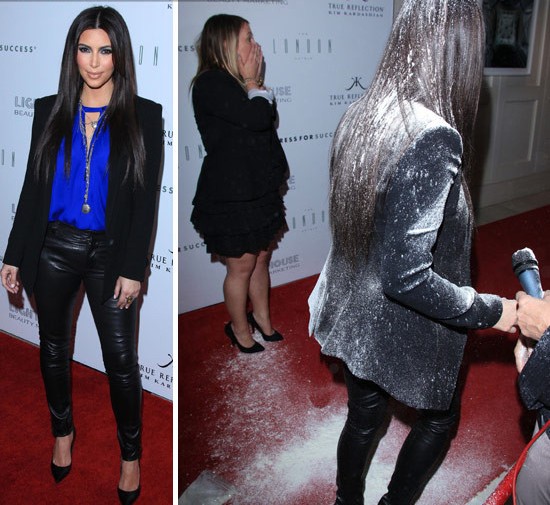 By now, I’m sure you all know that Kim Kardashian got flour thrown at her during the launching of her new perfume. The angry lady that threw the flour at her also shouted out, “Fur Hag!” which led to speculations that PETA may have been responsible for it. PETA admitted that they were very pleased to hear what happened, but that they are in no way involved.

A rep for PETA, People for the Ethical Treatment of Animals, said: “It was not [us]. We were given the video by an anti-fur activist on the scene.”

“PETA has tried everything from polite letters to public protests, but Kim Kardashian has not been moved by the news that animals are beaten, electrocuted, and even skinned alive for real fur garments. Whoever threw that flour may reach her when our polite appeals did not,” said PETA rep.

The flour-tossing activist was detained by cops then released because Kim was not going to press charges; but now, Kim has decided to go ahead and press charges because she believes the woman should not get away with assault.

PETA stated: “If she presses charges, at least people will be constantly reminded of her selfish, callous disregard for the cruel deaths that she causes by wearing fur.”

“How much better it would be if she decided to evolve and enhance her image by donating her vulgar furs and exotic-animal skins to the homeless. The activist acted from the heart, something Kim doesn’t seem to have,” they continued.

“If anything, Kim should get a life, the very thing that she denies animals,” they concluded.

PETA also said they’re willing to help the flour-tosser by paying her defense costs if she asked them to.

Do you think Kim deserved the flour-tossing?

Newer Post Rapper Drake Smokes Marijuana at a Nightclub!
Older PostGood News for Hip-Hop: NAS is back and Life Is Good!