Mexicans saved by the whistle 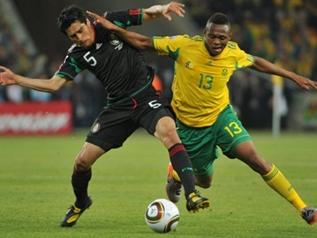 South Africa failed to grab 3 points from Mexico in the opening game of the FIFA World Soccer 2010. El Tri succeeded in hijacking a 1-1 draw from the jaws of the “Bafana Bafana” after an equally balanced game between the two teams. Siphiwe Tshabalala scored first in the (55th min.) for South Africa, and Rafael Marquez equaled the result in the (79th min.) with a goal for Mexico.The two opening teams will be waiting for the result from the France and Uruguay match in Cape Town to determine the order of the teams in this group. The Mexican national team completely dominated the opening half without success in scoring, until the Bafana Boys had something else to say, and scored dominating most of the second half. 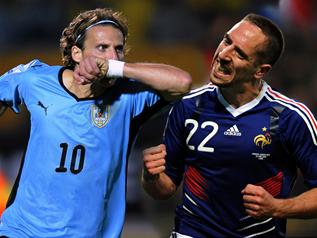 France and Uruguay draw in a ‘dull match’

The French and the Uruguayans ended a dull game in draw. Both teams were not up to the level of the WC2010 in this game, forcing soccer fans to witness the first nil draw in the tournament. No serious chances have been recorded during the game, except a couple of shots on the goal from Diego Forlan and Gourcuff. This leaves group A teams with one point each after the first round.