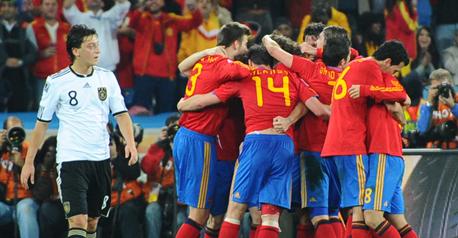 Spanish team achieved their dream of qualifying for the first time in its history to the World Cup final, having made a difficult win over their German counterpart and beat them 1 – zero on Wednesday at “Moses Mabida” Stadium  at Durban City. The semi-final game was equal and one of the best matches played n the tournament with a better performance to the Spanish side. Barcelona defender Puyol succeeded in scoring in the 72nd minute, putting La Roja a step ahead to the finals. By the end of the match Spain make it for the first time ever to the finals announcing themselves favors to raise the cup for the first time.