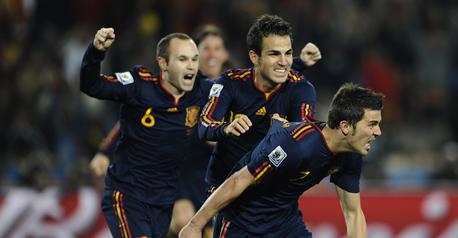 Saved by the Villa, again!

It took Spain 83 minutes to advance to the semifinals. Once again save by David Villa after a tiring match against the stubborn Paraguay. Spain passed Paraguay on a cool evening in Johannesburg. After either side missed a penalty early in the second half, David Villa netted a late winner for the Spaniards, who for the first time in history advance to the semifinals. Spain will meet the German team in the Semi-finals with one aim in mind, to take the cup back home. 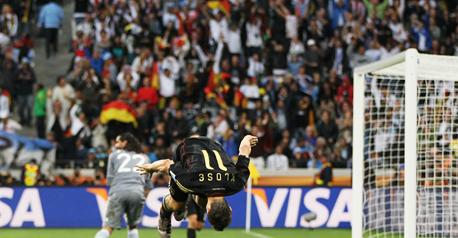 The Germans Machines booked a one way ticket to Diego Maradonna and the Argentinean team back home after humiliating them and crushing them in one of the most unexpected results in the World Cup Matches. The German scored four times, through Muller, twice by Klose and Friedrich. The Argentinean team seemed very disorganized and affected by the media war launched lately by Maradonna and could not control the attacks of Germany all through the game. Germany now has qualified to the Semi-finals to face the winner from Spain and Paraguay.

The Germany and Argentina game has taken a very nervous and sensitive turn after the media war between Maradonna and Shweisentiger and Luther Matheus from the other side. The German win is another record in the series of wins Germany has accomplished through the decades after 1990 in the finals, and 2006 in the Quarter finals.