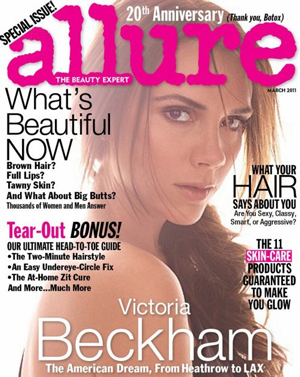 Victoria Beckham has dished the dirt on her home life! The former Spice Girl — who’s married to soccer star David Beckham and is currently pregnant with her fourth child — has told Allure magazine about her “happy house” with her husband and three sons.

“Our house is a really happy house. There are kids running around and laughing and joking, I smile so much more than people would think,” she said.

“There’s nothing better than being in LA with my kids, cooking dinner with my husband and having a romantic night in, and I get an email, and Demi Moore, Madonna, Drew Barrymore, Blake Lively, or whoever it is, is doing the red carpet and wearing my dress.”

Recent reports claimed Victoria is splashing out $300,000 on a nursery for her baby.

“She hasn’t looked at a price tag for a single thing she’s bought. If she wants it she gets it, no questions asked!” a source said.

“Believe me, that baby will be surrounded in luxury from the minute she, or he, comes home from hospital.”

The room is believed to have a “bunny” theme, with the fashion designer planning to buy a $2,000 ‘French Bunnies’ round cot with hand-carved woodwork from exclusive store Petit Tresor, as well as a matching nightlight and two lamps.

Victoria — who was said to have been told she was expecting a girl at a 16-week scan at the private Rivers Hospital in Hertfordshire, East England — has also ordered a rocking chair and cashmere robe from Petit Tresor, while she is snapping up blankets from Little Giraffe following a recommendation from friends Tom Cruise and Katie Holmes.

Even though she has hired a decorator, Victoria is overseeing the styling of the nursery, which is to have an “old-fashioned theme with a shabby-chic feel”.

“The decorator was pushing colors other than traditional girlie pink but she wouldn’t hear of it,” said the source. “Victoria gave strict instructions that she wants the room to ‘look like a little girl lives there’.”