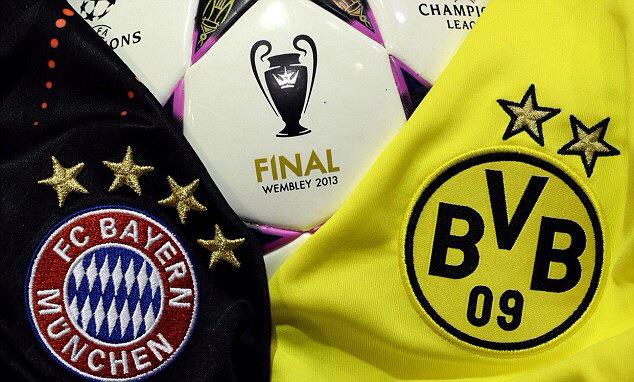 When Bayern Munich and Borussia Dortmund step on Wembley stadium tomorrow night, the world of football will be witnessing what will probably be the most exciting game of the season between two German sides looking to win Europe elite prize, the Uefa Champions League.

Borussia Dortmund will be aiming for their second European glory, after they beat Juventus 3-1 to claim the trophy in 1997, while four-time champions Bayern Munich, will try to end the final curse that hold them back in 2010 against Mourinho’s Inter Milan in 2010 and last year against Chelsea.

Dortmund will miss their prolific play-maker Mario Gotze, who was confirmed out of Saturday’s clash due to a hamstring injury he suffered in the return leg of the semi-finals against Real Madrid, but the good news is that centre-back Mats Hummels who was a doubt for the final due to his ankle injury is progressing well and will probably start for Dortmund.

As for the Bavarians, defender Holger Badstuber who will be sidelined for months and midfielder Toni Kroos who picked up a muscle injury in the quarter-finalof the UCL first leg against Juventus are both set to miss the final.

With the absence of Mario Gotze, klopp will most likely play with 4-3-2-1 instead of his usual 4-2-3-1 with Reus going deep into the center to support Lewandowski alongside with Kevin Grosskruetz from the left and Jakub “Kuba” Błaszczykowski from the right, while Bender and Gundogan helping Reus when the team is set to defend.
In the defense, with Hummels fit to play no major change seems to happen, as the German centre defender is expected to partner with Subotic, while Schmelzer is set to defend the left side and Piszczek on the right.

Bayern Munich will most likely continue to play with the same 4-2-3-1 formation which helped them demolish Juventus (4-0) and Barcelona (7-0) on their way to the finals.
Manuel Neuer as a goalkeeper, Dante and Van Buyten in the centre-back, while German brilliant captain Philipp Lahm on the right side and Alaba on the other side, Javi Martinez will be just in front of the four defenders while Schweinsteiger slightly ahead of him building the attacks.
Robben will continue going wide on the right side with the absence of Toni Kroos while in-form Franck Ribery occupying the left side.
Thomas Muller will continue his role as the main provider for Mandzukic who is expected to start ahead of Mario Gómez.

Dortmund will allow Bayern to have the ball and play their game, as they will rely on the counter attacks which they are brilliant in, specially with key-player Gotze out of the clash, going full speed with Gundogan and Bender trying to provide the ball to Marco Reus as much as possible, who himself will support Lewandowski in the box, also Grosskruetz and Kuba will have a major mission in Dortmund’s counter attacks from the wings along with their defensive mission by trying to keep Lahm and Alaba in their half of the field and not providing Muller and Mandzukic with many balls.

Bayern, on the other side, will possess the ball as usual (second team after Barcelona with possession percentage) and will dominate the midfield most of the game with its powerful midfielders Javi Martinez, Schweinsteiger, Ribery and Robben, and will rely deeply on their wings with Lahm and Robben on the right side and Alaba and Ribery on the other side.

All of the above are probable formations, tactics and overviews which are still not confirmed, one thing we are sure about is that this Saturday night we will witness one of the most exciting games of the season from the players and from the coaches.