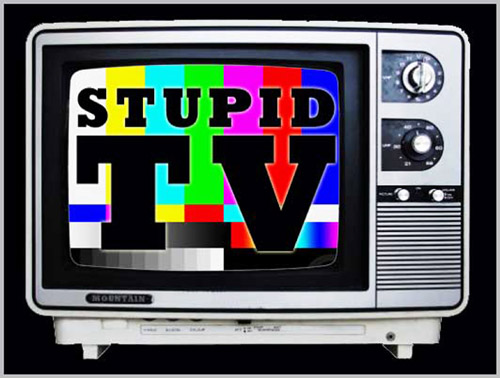 I’ve been asked time and time again to write about the silly shows on our local TV channels, but my answer has always been, “sorry, I can’t – I do not watch local TV.” But today, I’ll gladly name a FEW of the shows I remember watching, which made me ban local TV from my life . . . forever.

The Perfect Bride: Oh yes, I would love to watch a “reality show” about a bunch of desperate, helpless, gullible women that are being judged by their future mothers-in-law on cooking, cleaning, and every other housekeeping task that would keep their future husbands happy. Furthermore, the “Perfect Bride” is chosen by the future mother-in-law! The suspense is not over yet though; will the Amish bride to be say “yes” to the mama’s boy groom to be? To the “Perfect Maid Bride” contestants:  Are you living in the 15th century? Do you enjoy being locked up and bossed around by your future mother-in-law for weeks just to receive your five minutes of shame fame? Are you mentally ill? 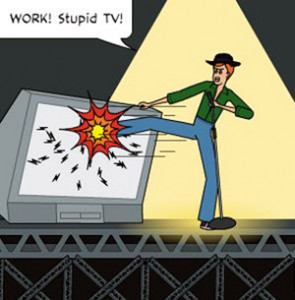 Star Academy: Well, it’s supposed to be a show for discovering new talent in singing and dancing – but where is the talent exactly? Their choreographed dance moves look more like epileptic seizures; and watching them on stage is only mildly less painful than watching a ton of bricks flying at my face. The closest I can get to describing their voices is this:  when I was younger, I used to spend my summers in my hometown up in the mountains. I distinctly remember hearing bizarre sounds like cats getting raped and wolves howling at 4 am. When my friends would sleep over, those noises would worry them; so I would comfort them by explaining that it’s the “cat rape hour”.
Friday night’s “Star Academy cat rape hour prime” brought back many memories.

The biggest Loser: I’ve never liked obese people. I don’t care if they have eating disorders, experience mental problems, or love their fried chicken a little too much. What they do to gain or lose weight is none of my business. The last thing I want to see on TV is a bunch of tremendously fat people bouncing around on treadmills and crying as they express how hungry they are to the camera (and this is because they are now eating two whole grilled chickens for lunch instead of the 15 fried ones they used to wolf down consume before). I don’t really care if I sound politically incorrect, insensitive, or mean – it’s just a nauseating sight to see. Let’s lose the 150 extra kilos privately.

LOL: I’m not really sure what the point of this show is (entertainment?!), but what really baffles me is how certain TV channels found it essential to air their own version of the show. To the producers of “LOL”: Do you think you’ve become cooler or more westernized by being so cheap and vulgar? If so, TV networks in the USA have a little something you should learn about: censorship. Is this the example you’re setting for your viewers – that it’s cool to walk around saying profanities like that out of a garbage mouth?
Breaking news: You are NOT funny; in fact, you are lame, offensive, and you’re the biggest waste of TV space. What’s sadder than the “LOL” show is the other show(s) imitating it, and what is even sadder is their empty-headed audiences.

Basmat Watan: I can only imagine how the producers of this show came up with this lame and overused 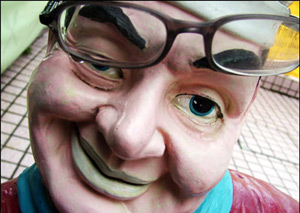 stimulating and original concept: “Oh I know, let’s do something that’s been done 253 times before. Let’s make a funny TV show that makes fun of politicians, because Lebanese people don’t have knowledge about anything other than politics – but we’ll make it even more vulgar controversial, cliché hilarious, and dull clever.” Then after they came up with that enlightening concept, they all simultaneously peed in their pants with excitement. Can any of you count how many of these shows have been created, aired, and adored? WHY?!

Anjad: Well, I’ve never watched this show (and I never will), but I always hear its advertisement on the radio and accidentally see it on TV while browsing through channels. Please, has anyone seen this show’s ad? First of all, I can’t believe it’s called “Anjad”. Second of all, I can’t believe how the female host says “Anjaaaad? Anjaaaaad!” To Ms. Female Anjad Host: I do not want to hear you having a sexual orgasm over the name of your show.

Ahmar Bel Khat El Arid: Ha Ha Ha! This is the funniest show on television. My favorite episode is when they spoke about genies. The producers must have selected the craziest, most delusional people in the country to cry about how genies raped them and their siblings. Everyone on the show is always so serious and frightened, except for the psychiatrist that realizes how retarded absurd everyone on the show is. Of course the show always ends with a big baffling question (after everyone has fought with everyone else).

Zaven: I am not sure what the purpose of the show is. In fact, I don’t think Zaven is sure of what he’s doing either when he asks questions like:
“When your father raped you, did it upset you?”
“When your entire family was killed during the war, did you cry?”
“When you lost both arms and legs, did you feel hopeless?”
Well Zaven dearest, thank you for stating the obvious opening our eyes by asking these imaginative questions.

Kalam El Nass: I never hear any “nass” (people) talking. If anyone says something that Mr. Ghanem doesn’t like, he either ends the phone call, or snatches the microphone away, or cuts to commercial. His guests are always trying to kill each other arguing while he chuckles (like an evil cartoon dog) and flashes his expensive watch on camera. Mr. Ghanem please keep in mind that the show is called “Kalam El Nass” not “Shut up and Look at My Watch, B****es”.

Over the past five years, I have painfully tried to watch these shows; and thus encourage local television, but my attempts have failed miserably. I guess I am just not the type of audience they are targeting; I have a functioning brain and a good sense of humor.

To everyone and anyone who works in TV: innovate, don’t imitate. We have enough “stupid” going around, so it wouldn’t kill you to try a smarter, wittier approach; whether the show is informative or funny.

“I wish there was a knob on the TV so you could turn up the intelligence. They got one marked “brightness” but it don’t work, does it?” Leo Anthony Gallagher