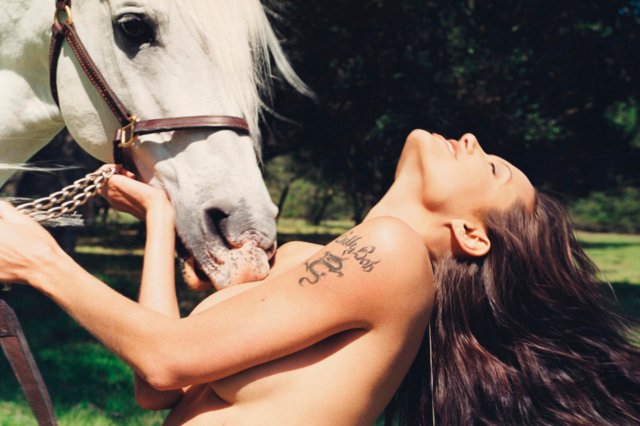 A never-been-seen topless photograph of Angelina Jolie has surfaced and RadarOnline.com has learned the racy photo is expected to bring in nearly $50,000.

The picture is 12 years old and was taken by famed celebrity photographer David LaChapelle in 2001 when Angelina was just 25-years-old, posing with a white horse.

A chunk of photos will be auctioned next month during The Wild Side of Photography sale at Christie’s fine art auction house in London and Angelina’s snap is expected to go for between $30,000 and $46,000.

Angelina’s famous ‘Billy Bob’ tattoo from her one year marriage to actor Billy Bob Thornton is front and center as she throws her brown hair back and the horse kisses her bare breasts.

Not only will the topless photo be up for grabs, but a black and white photo of Angelina and Brad Pitt posing as husband and wife with a dinner table full of kids taken in 2005 by Steven Klein will also be auctioned off and should bring in up to $15,000.