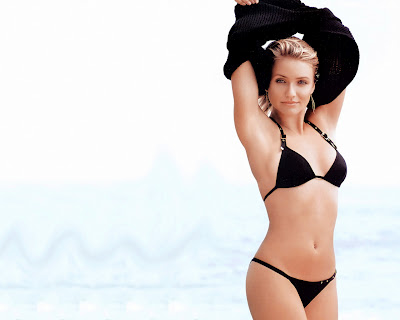 According to sources, Tom Cruise has already moved on from ex-wife Katie Holmes with the help of Cameron Diaz – the unlikely couple have been spotted out on a “sexy date” together recently in London.

We just… we just don’t believe it. Surely Cameron is too tall for the diminutive Tom, for a start?

Insiders at Life & Style have reported that things have begun to hot up between Tom Cruise and Cameron Diaz after he attended her 40th birthday party at the Coworth Park hotel.

“A beautiful setting, fabulous food, a happy occasion — the perfect sparks to ignite the flames of a new romance… I could see them hooking up, absolutely.”

“A love connection between the two mega celebrities wouldn’t be as surprising as it sounds.”

So he’s “awesome”, is he? Then they MUST be dating – how ridiculous!

As fans of the pair may remember, Cameron and Tom starred together in ‘Vanilla Sky’ and ‘Knight & Day’ together. And, with a few more joint film projects lined up, they’re sure to be spending a lotta time together.

Plus, after Cameron Diaz famously told In Style that she could see herself dating a partner with children, we guess she might even be willing to take on Tom’s children:

“I could end up with a partner who already has children.”

Then again, having Suri Cruise as a step-daughter would be pretty insane… we guess we’ll just have to wait and see what happens between Tom and Cameron in the future.