The World of Yachts Recognition Awards 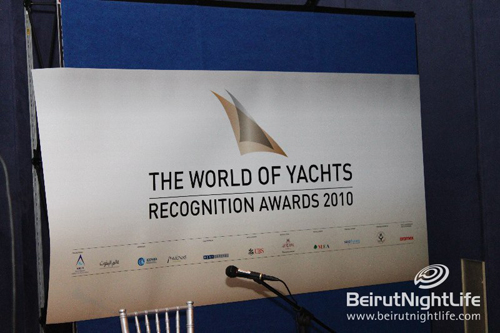 Le Royal Hotel, Dbayeh posed as the venue hosting the First Annual Awards Ceremony Dinner held in the framework of the 3rd day of Beirut Boat 2010. The Gala dinner brought together various marine related personas and government officials from the Gulf, AMIA members, yacht owners, and the Elite of the Middle East Super Yacht Industry, in addition to IFP members (the organizers) and Messe Dusseldorf the co-organizers of Beirut Boat 2010.

The lavish ceremony was a landmark that pin-pointed the beginning of many more to come which aim was to honor diverse marine references for their impactful contribution & recognized accomplishments in the industry.

Talking to Mr. Nabil Farhat, Publisher of World of Yachts & Boats Magazine: “We gather today to celebrate yachting excellence. After 17 years of exposure to the practice, I’ve come across so many experts, and we’ve chosen to honor the crème of the crop, recognizing their efforts, whether boat builders, designers, Marina & Management individuals and so on…”

And to add: “It is in event like these that we successfully create a diverse and exciting boating community in the region. This is the chance for the region to celebrate its achievements, and a great opportunity for regional yacht builders to be noticed worldwide.”
A panel of judges was especially put together comprising admired industry experts and professionals who chose the “best recognized achievements that have occurred in the last few years within the Arab Marine Industries and Services”.
Mr. Edward Aoun, Director at IFP & secretary General of AMIA highlighted: “This sixth edition of Beirut Boat 2010 has been a tremendous success, and I’m pleased to have paved the way to these awards that will become an important touchstone for the growing community of yacht owners, operators and industry insiders in Lebanon and throughout the region. These awards are destined to individuals and companies who have been recognized for their leadership and dedication to raising the standards of design construction, maintenance, marina management, repair and operation of yachts.”
32 Awards were distributed amongst the identified leaders according to the following categories: the Boat Builder’s Award, Dealer and After Sales Service, Designers, Marina and Management, Arab Yachting Personality, and International Yachting Personality.

For the Category of Life Time Achievement, notable wins from around the world included Mr. Abdul Rahman Adib who shaped Düsseldorf’s flagship among consumer fairs and established Messe’s international reputation, and H.E Minister Mohammed Al Shaali- former Minister of State for Foreign Affairs of the United Arab Emirates- were handed out their trophies as an embodiment of their impactful to the industry.

After the awards handing, the ceremony ended with a delectable dinner and a jet set scene quintessential for a yachting ceremony of that scale.