The Saudi Shard: Skyscraper at ONE KILOMETRE high 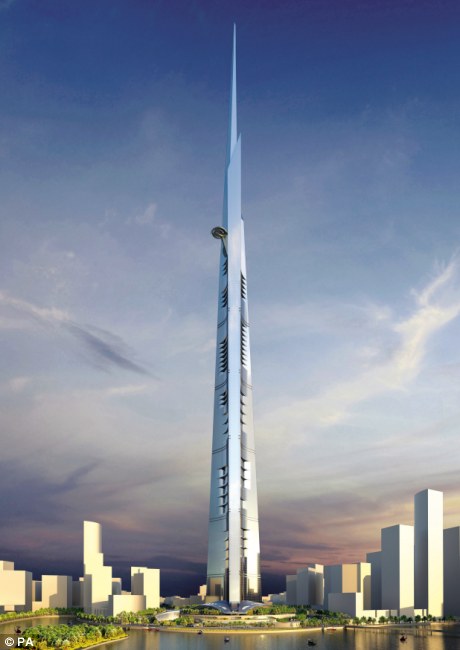 The British company that built the Shard has landed a contract to manage the construction of what will become the world’s largest building – and plans reveal the two look remarkably similar.

London-based Mace won the £780million deal to build the Kingdom Tower in Jeddah, Saudi Arabia, which will stand more than 3,280ft (1km) high.

The Shard is currently western Europe’s tallest building, while the company also played a role in several of London’s most recognisable landmarks, such as the London Eye.

Mace will participate in a joint venture with fellow British firm EC Harris to create the huge building, which has been given a completion date of 2018.

The Kingdom Tower, which will have a construction area of more than 5,381,955 square feet (500,000 sq m), will stand at four times the size of the Shard.
It will overlook the Red Sea and is expected to take over from the Burj Khalifa in Dubai, which standing at an incredible 2,717ft (828m), as the world’s tallest skyscraper.

It is not yet known how tall the skyscraper will be as developers keep exact details of the plan a secret. 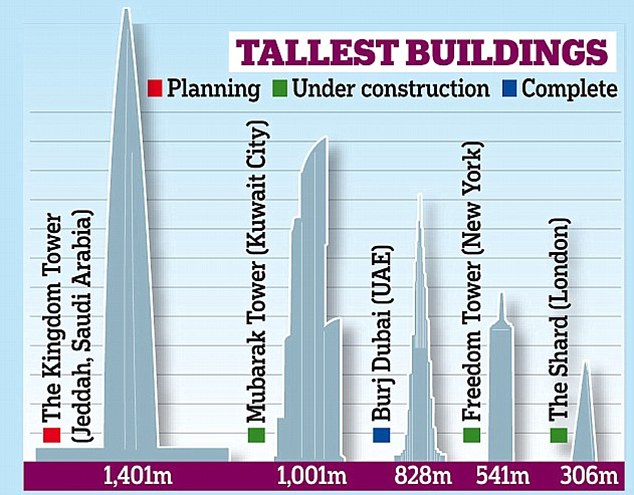 The development, unveiled by billionaire Prince Al-Waleed bin Talal, is part of a £13billion redevelopment of the Kingdom City, north of Jeddah.

The plans have been designed by American firm Adrian Smith + Gordon Gill Architecture.

When the design was originally unveiled in August 2011, it was said the tower will have a three-petal footprint and tapering wings to produce an aerodynamic shape that will help reduce structural loading due to wind vortex shedding.

Each of its three sides features a series of notches that create pockets of shadow to shield areas of the building from the sun and provide outdoor terraces with stunning views of Jeddah and the Red Sea.

It will contain 59 elevators, with the quickest travelling at a rate of 10 metres per second, and have a five-star Four Seasons hotel.

The sprawling mega project, first announced in 2008, will cover two square miles at its base, and will also include serviced apartments, luxury flats and offices.

The Jeddah Economic Company (JEC), which appointed EC Harris and Mace to provide project, commercial and design management, said the vision for the building belonged to bin Talal.

In 2011, it was said that construction firm Saudi Binladen Group had been given the contract to build the structure, one of seven ambitious projects in the kingdom which is OPEC’s top exporter of oil.

The Prince had initially wanted to build the tower a mile high, but abandoned the proposals because he was worried the soil would not support its foundations. But it will still shatter the record for Burj Khalifa, which opened in January 2010.
That tower has 160 liveable floors and rises 2,717 feet, making it not only the tallest building but also the tallest free-standing structure in the world.

Prince Alwaleed wants the tower to ‘send a message of strength’ in tough economic times.

The work is intended to diversify the economy from the crude oil that has fuelled the kingdom’s growth for years.

It also reflects a continuation of the unstated race between the oil rich Gulf nations that are also pumping tens of billions of dollars into job creation and housing for their lower income residents.

JEC’s chief executive officer, Waleed Abdul Jaleel Batterjee, said: ‘His vision is also that the project itself will set the world’s sights on our beloved Kingdom of Saudi Arabia and particularly on Jeddah.’

Building work will start later this year and will be completed within 63 months. Meanwhile, JEC is in final talks about appointing a quantity surveyor consultancy which will also be a UK-based firm.

Mark Reynolds, chief executive of Mace, said: ‘Kingdom Tower is a project of international importance and immense ambition and we are delighted to be part of the joint venture team tasked with its delivery.’

Keith Brooks, head of property and social infrastructure at EC Harris, said: ‘The Kingdom Tower is a landmark building that will clearly demonstrate Saudi Arabia’s ambitions to the world.’
Source: http://www.dailymail.co.uk