The Pen and the Sword in a Mighty Partnership: Montblanc and Laguiole 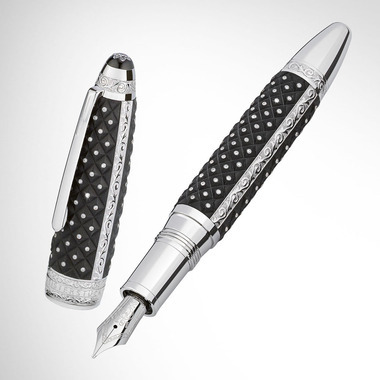 A special collaboration between Montblanc and Laguiole gives birth to a stylish creation. Nicole Swengly tells us more.


A fresh twist on that old adage “the pen is mightier than the sword” characterises today’s launch of an unusual collaboration between Montblanc, creator of the legendary Meisterstück fountain pen, and Forge de Laguiole, the artisan producer of the much-loved Laguiole shepherd’s knife.

What, you might ask, unites a chic pen and a sharp blade? Expertise and fine craftsmanship – exactly the same values that prompted Montblanc to inaugurate its Montblanc Masters for Meisterstück series in 2010, which began with a collaboration with Meissen porcelain, and now sees this creative partnership with the long-established forge in the L’Aubrac region of southern France.

Combining their skills, the two companies have produced a trio of exceptional reinterpretations of the Meisterstück LeGrand fountain pen. The rarest design (first picture, £43,000), produced in a limited edition of eight, is intricately crafted from ebony using a three-dimensional pineapple pattern – the traditional Laguiole motif – each facet of which is set with a brilliant diamond. The pen’s ornate 18-carat-gold nib is engraved with a graceful leaf, while its cap is crowned with a Montbanc diamond whose patented cut emulates the company’s signature star emblem.

Limited to 50 pieces, the Artisan Edition fountain pen (second picture, £17,200) is fashioned from rare Brazilian wood, with finely chiselled, 18-carat-white-gold inlays, an 18-carat-gold nib and a Montblanc diamond on the cap. Meanwhile, the collection’s Special Edition (£1,680) contains a Meisterstück LeGrand fountain pen and rollerball, both crafted from exotic granadilla wood (prized for its fine grain and lustrous waxed finish), with an 18-carat-gold nib. Details on the cap and barrel include tiny sterling silver rivets inspired by Forge de Laguiole knife handles, while the cap’s silver rings bear the heritage Laguiole motif and Montblanc signature.

In putting the heritage crafts of pen- and blade-making on an equal footing, these chic designs rewrite that old saying in style.