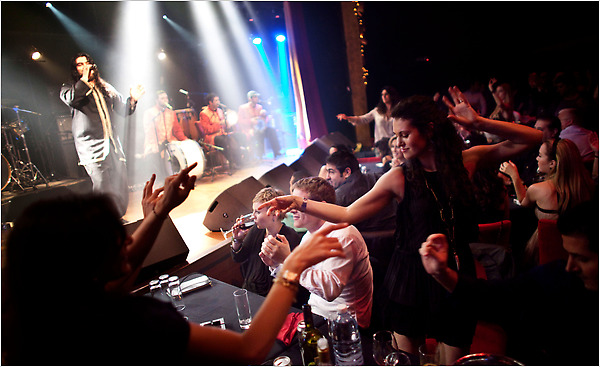 WANT a Beirut investment tip? Concrete. Thanks to a couple of years of political calm, the palm-fringed Middle Eastern city is bingeing on new buildings and cultural projects. A fast-expanding night-life strip, an upstart design district, new hotels and the country’s first contemporary art museum have all sprouted in the last few years. And they’re certainly not going unnoticed. A record number of travelers showed up to discover Lebanon and its capital in 2009. If the peace holds, look for an even bigger swell this year.

Muslim women in headscarves, scruffy locals in rock T-shirts, Filipina baby sitters: come dusk, Beirut’s seaside walkway known as the Corniche becomes host to a city on parade. To watch it and enjoy views of the glittering Mediterranean while you’re at it, start across from the Hard Rock Cafe (where an outdoor banner reads, “The time will come when you see we are all one…”) and stroll west past the fast-rising hotels, luxury apartment buildings and the leafy campus of the American University of Beirut. The Manara Palace Cafe (961-1-364-949), next to the lighthouse on the water, is a perfect place to absorb the salt air, wash of waves, cry of seagulls and fiery sunset while drinking fresh mango juice (7,500 pounds, or $5 at 1,492 Lebanese pounds to the dollar) and smoking sweet fruit tobacco from a narghile pipe (12,000 pounds).

Late night unleashes a sea of C’s — Champagne, Chivas Regal, Cohibas, Cartier, cleavage — at Music Hall (Starco Center, Minet El Hosn; 961-3-807-555; elefteriades.com), where dolled-up young professionals, cigar-smoking captains of industry and local celebrities fill the plush red booths and chairs to watch more than a dozen musical acts belt out a globetrotting playlist. Backed by an orchestra in red robes, the talents range from leopard-print divas doing Beyoncé covers to the Chehade Brothers, a Palestinian pair who kick out rollicking Arabian jams in exotic scales. Book in advance. The $55 cover charge is applied toward drinks. (Note that prices are often quoted in American currency, and dollars are widely accepted.)

Find an empty suitcase and wheel it down to Souk El Tayeb (Saifi Village parking lot; 961-1-442-664; soukeltayeb.com), Beirut’s first farmers’ market, which started in 2004. Drawn from a broad spectrum of Lebanon’s diverse faiths and rural regions, the dozens of growers, producers and artisans who gather every Saturday (9 a.m. to 2 p.m.) represent both a subtle social experiment in national reconciliation and an excellent market for snapping up local olive oil, tomatoes, cheeses, jams, breads, soaps, baskets, flowers and nearly everything else from Lebanon’s horn of plenty. It’s a prime spot to assemble a farm-fresh brunch. The Earth & Co. stand serves hot manouche (5,000 pounds), warm thin sourdough bread wrapped around thyme, labneh cheese and sliced tomato.

Whether you’re furnishing a sultan’s palace or a mere studio, the Ottoman-style town houses in Saifi Village are quickly filling with boutiques from top Lebanese design talents. Nada Debs (Moukhalsieh Street; 961-1-999-002; nadadebs.com) mixes Far East and Middle East styles, like a cube-shaped oak candleholder inlaid with geometric mother-of-pearl patterns ($100). And Bokja (just off Moukhalsieh Street; 961-1-975-576;bokjadesign.com), run by the design duo Maria Hibri and Hoda Baroudi, takes iconic chairs and sofas by Western designers, like the classic Eames lounger, and reupholsters them with kaleidoscopic collages of fabrics from the Middle East, Central Asia and beyond.

With the new Beirut Art Center (Jisr El Wati, Street 97, Building 13; 961-1-397-018;beirutartcenter.org), the Lebanese capital is emerging as a strong contender for the art capital of the Middle East. Opened last year, the nation’s first contemporary art museum is an airy white two-level space that holds rotating exhibitions — often two at a time — all year long. From the experimental films of the Lebanese architect Bernard Khoury to the photographs of Emily Jacir, a Palestinian conceptual artist, the museum’s rotating exhibitions are the most unusual, adventurous, intellectually challenging and envelope-pushing that you’ll find in Beirut.

A clutch of new French restaurants seem bent on recapturing Beirut’s long-ago nickname as Paris of the Middle East. Opened in November, the neo-bistro Couqley (The Alleyway, Gouraud Street, Gemmayzeh; 961-1-442-678; couqley.com) is run by the French-American-Belgian chef Alexis Couquelet, who is a veteran of top Gallic kitchens including Paris’s Market and La Bastide de St.-Tropez. Twice a week, he receives shipments of beef and duck flown in from France, resulting in a thick filet de boeuf with a Bordelaise sauce, and a confit de canard jazzed up with fresh raspberries that cut the fatty duck with fruity acidic zing. Book in advance. Dinner for two, without wine, about 120,000 pounds.

Mashroob is the word for a drink in Arabic, and you’ll find a whirlwind of them in the red-hot Gemmayzeh district. There’s a bar for every clique and mood. Bourgeois singles and 40-something divorcées sip Chateau Ksara wine and crowd the long bar at Kayan (Liban Street, Gemmayzeh; 961-1-563-611), an airy and vaguely British colonial-style bar. For live Arabian music, backgammon and water pipes, try Gemmayzeh Café (Gouraud Street, Gemmayzeh; 961-1-580-817). And when it’s time to dance to D.J.-spun electro, house and indie rock, the self-styled cool kids and creative set swill Almaza beer in the velvety confines of Behind the Green Door (across from Electricité du Liban, Gouraud Street, Mar Mikhael; 961-70-856-866).

If you’re still feeling the excess of your Arabian night, mimosas and Bloody Marys await at Casablanca (Dar El Mreisseh Street, Ein El Mreisseh; 961-1-369-334), an Ottoman-era mansion restored with funky colors and contemporary art. Menu items like French toast, eggs Benedict and bagels with smoked salmon suggest a New York City diner. But the chatter of Arabic, French and English from Lebanese brunchers brings you back to cosmopolitan Beirut. Brunch for two, about 60,000 pounds.

In a city of many faiths — Christian, Sunni, Shiite, Druze — at least one religion is universally practiced: sun worship. One of the most pleasant temples is Lazy B (off the airport highway, Jiyeh; 961-70-95-00-10; lazyb.me), about 20 miles south of Beirut. From May to October, the tranquil beach club features a smorgasbord of sandy coast, rocky coves, grassy expanses, scenic outdoor terraces, swimming pools and other spots where hordes of heliophiles absorb ultraviolet rays and cultivate their bronzed exteriors. So here’s a final Beirut investment tip: suntan oil.

Many airlines including Air France, Lufthansa and Egypt Air offer flights to Beirut from New York City with a layover. A recent search found a Lufthansa flight in May from Kennedy Airport, with a change in Frankfurt, for about $1,200.

A good budget bet is the Mayflower Hotel (Yafet Street, Hamra, 961-1-340-680;mayflowerbeirut.com), a British colonial-style hotel that was spruced up in 2007 and offers Mediterranean vistas and a rooftop pool, with 85 rooms from $130.

Article by the New York Time.