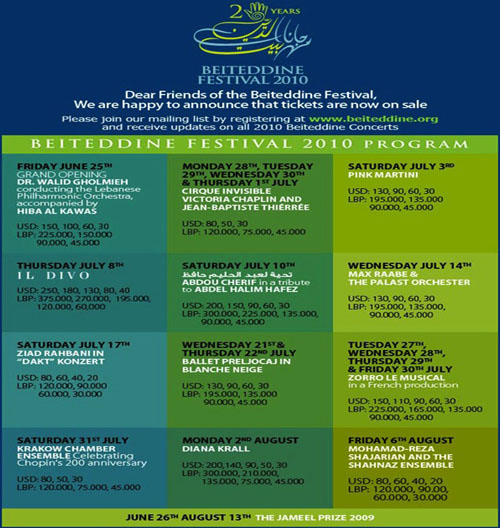 The Beiteddine Festival, one of the leading festivals in the Middle East. It takes place in a large and magnificent 200-year old Palace in the Chouf mountains, in Lebanon.

Each year, in the months of July and August, the Festival presents outstanding performances by world famous stars and Lebanese artists.

In 2010,the Beiteddine Festival celebrates its 25th anniversary… born during the war, in 1985, the Festival has developed, with time, into an international event, and is today the most attended Festival in the region, drawing tens of thousands of spectators every summer into the palace’s beautiful court yards

Here is the Beiteddine Festival 2010 schedule:

Mon.28th June till Thur.1st July Cirque Invisible
Victoria Chaplin and Jean- Baptiste Thiérrée
From New- York to Tokyo, from Barcelona to Copenhagen, their show has generated the same enthusiasm and happiness all around the world.
A constant wonder. Do not miss these magical artists.

Thursday, July 8th Il Divo
Pop/Opera Band with four incredible voices in one incredible concert.
Il Divo is a group of exceptional Classical Operatic singers who give popular songs a new flavor. They are truly divine!!

Saturday, July 10th A Tribute to Abdel Halim Hafez
Interpreted by Moroccan star Abdou Cherif, accompanied by Maestro Ihsan Almounzer and his 50 piece Orchestra.
A revival of  Al Andaleeb Al-Asmar’s Life and Legacy through his filmography.

Wednesday, July 14th Max Raabe & the Palast Orchester
Come and discover the new star of Europe in a concert extravaganza of the Golden age of the 1920s and 1930s.
The Weimar Cabaret Crooner will bring recollections of “Les Années Folles”. A night to remember…

July 21st & 22nd Ballet Preljocaj, Blanche Neige
The fabulous creation of the Ballet Preljocaj, Snow White, is a great romantic contemporary ballet based on the Grimm brothers’ version of the fairytale.
Angelin Preljocaj is working with all 26 dancers of his company on the most beautiful scores of Gustav Mahler. The costumes are designed by Jean- Paul Gaultier, and the set by Thierry Leproust. Voted the Best performance of 2009 in France.

July, Tues 27th till Fri 30th Zorro , le Musical
The new French production with more than 70 artists including a large Orchestra in a splendid mixture of chills and thrills. It is entertainment, pure and simple. The perfect theatrical night out. This really is a show for all the family. All set to the famous red-hot Gipsy Kings beat brought to the stage with the authentic colours of traditional Flamenco. A truly dazzling choreography by Rafael Amargo.

Monday, August 2nd Diana Krall – Yes! She is finally coming…
Once every generation an artist comes along that transcends a particular style of music and broadens its audience to the masses.
For modern jazz music, that artist is undoubtedly Diana Krall.

Exhibitions:
1 -The Jameel Prize 2009 – From the Victoria & Albert Museum
Contemporary art and design inspired by Islamic tradition. That’s the subject of this new international prize, founded by Mohammed Abdul Latif Jameel and organized by the Victoria and Albert Museum in London. This exhibition of work by the nine finalists includes the winning piece from the inaugural competition in 2009 — a magical light-based installation by Afruz Amighi.

A recollection of the Festival’s best moments

Tickets are sold at: