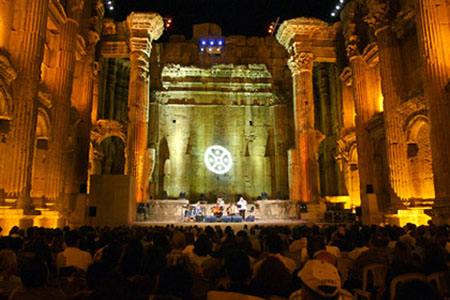 The organizing committee for Baalbeck International Festiveal, the oldest and the most prestigious festival in the Middle East, has announced it program for this year the participation of great names. The festival is expected to attract crowds from all over the world to attend the amazing line-up set for this years promising festival.

The Festival will start on June 24th with an extraordinary Pop concert hosting at The Courtyard of the two Temples, the Pop Music Genius of the beginning of the twenty first century Mika.

On July 9th Jazz lovers will get a double pleasure with two Jazz concerts in one night with Kevin Mahogany Quintet and Odean Pope’s All Star Nonet at the Courtyard of the two Temples.

On July 17th, the Orkiestra Sinfonietta Cracovia directed by Penderecki will perform at the Courtyard of the two Temples celebrating Chopin Bicentenary. The programme will feature

This July 24th, Boris Eifman Ballet Theatre of ST. PETERSBURG– A BALLET PERFORMANCE OF “ANNA KARENINA” are also expected to perform a breathtaking show at the Courtyard of the two Temples.

July 31st, the esteemed musician Naseer Shamma along with 30 musicians are also getting ready for a memorable night at the old city with a performance by Naseer and the House of Oud Orchestra at the Courtyard of the two Temples

And on Thursday 5th, Friday 6th & Saturday August 7th 2010 “TOO MUCH LOVE … KILLS” a musical extravaganza by Melhem Barakat & Ghassan Rahbani at The Courtyard of the two Temples. The musical concentrates on the conflict between Eastern and Western music. The main plot, music composition, and main roles are by Melhem Barakat and Ghassan Rahbani. Script, direction, and production by Ghassan Rahbani. Ranya El Hajj with the collaboration of Pierre Chamoun will be on stage accompanied by 100 artists; actors dancers and back ups. …A rich, colorful and joyful Lebanese musical …

The Baalbeck  International Festival (FIB) is the oldest and the most prestigious festival in the Middle East.

In 1955, a cultural association organized the first activities within the Roman Acropolis.

In 1956, Camille Chamoun, then President of the Republic, founded the “Baalbeck International Festival” managed by twelve benevolent members. It became one of the government’s institutions whose mission would patronize and encourage the country cultural and touristic life. Since then the FIB has been taking place annually during the months of July and August in the Roman ruins of the Baalbek Temples.

In 1966, the FIB started a drama school to promote Lebanese authors’ works for the stage, confirming its role as a patron of the arts.

The FIB evolved into a major cultural event celebrating classical music, opera, jazz, modern world music, Lebanese Nights, rock and pop music as well as ballet and theatre. Many of the world’s leading artists appeared on our stages.

After an interim (1975-1996), due to the Lebanese Civil War, the FIB came alive once again finding back its past glory with the top echelon of international, regional and local artists.

Dramatic lighting and a unique historic setting provided the background of the varied presentations, amazing 40,000 spectators each summer.

Owing to the highly volatile situation prevailing in the country since the latter half of 2006 and through the year 2007, the Executive Committee had to cancel all the representations in Baalbek. However, we managed to successfully hold in Beirut by early December 2006 three full house performances of the Rahbani brothers’ renowned musical comedy “Sah El Nom” featuring Fairuz, the legendary Lebanese singer.

Since August 2008 the FIB regained its place in the line of the most prestigious International Festivals.

The FIB is an association run by a 12 member Executive Committee elected every two years by a General Assembly.
May Arida: President.
Jeanne Sabbagh: General Secretary and in charge of Organization.
Bassam Mortada: Treasurer and in charge of Finance.
Rana Bohsali: in charge of Dance and Ballet.
Joumana Debbané: in charge of Sponsorship and World Music.
Asma Freiha: in charge of Media and Publicity.
Khalil Sinno: in charge of Lebanese and Oriental Nights.
Elga Trad: in charge of Administration.
Joe Letayf: in charge of Classical Music.
Avo Tutunjian: in charge of Jazz.
Wagih Ghossoub: FIB representative abroad.
Raymond Wakim: FIB director.