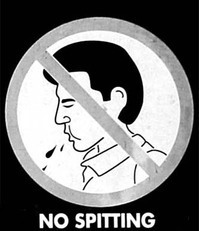 Residents and visitors to Abu Dhabi- UAE must clear their throats before going to public places as they could now be fined Dh1,000 (270 USD) if they spit in the road.

The capital of more than 1.3 million people intends to raise the Dh200 spiting fine by five times to eliminate the habit as part of a “package of penalties” targeting wrong behavior in public places, according to the Municipality.

The present Dh200-fine has already paid off as the number of penalties for spitting in public stood at only around 750 in the first nine months of 2012 compared with nearly 8,000 in 2011 and as high as 30,000 in 2010, when the Municipality decided on the punishment against bad behavior in public.

“There is a new list of fines which will be released soon…it includes a fine of Dh1,000 for spitting in public instead of the present Dh200 penalty,” said Khalifa Al Rumaithi, public health chief at the Abu Dhabi Municipality.

He said a fine of Dh500 would also be imposed on those who throw cigarette butts or chewing gums in roads.

“These penalties could be raised in the future considering the fact that removing one thrown chewing gum from the road cost the state nearly one dollar,” he said.

Rumaithi said the new fines were part of a campaign that also includes distribution of leaflets to workers and visitors in four languages .

“These leaflets warn all residents and visitors, mainly workers, against spitting in the road…they will be distributed in four languages at the airport, labour accommodations and work sites.”