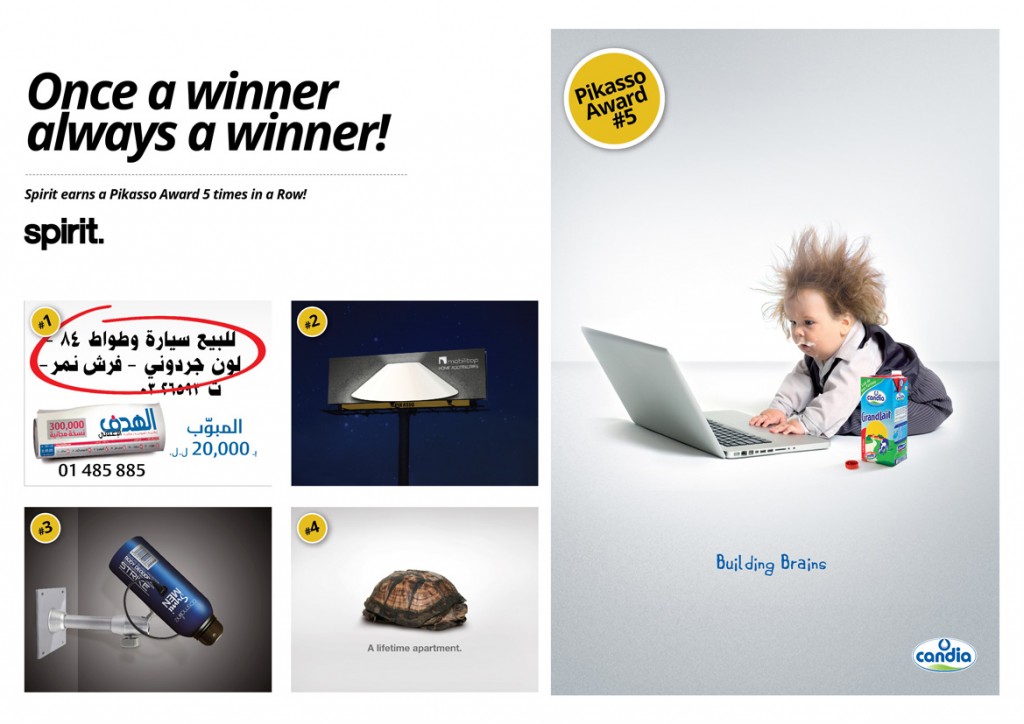 A new trophy from the distinguished Pikasso Awards has been handed out to Spirit for another year.

For Beirut-based advertising agency Spirit, February 21st marked another milestone in its energy to remain of the most creative agencies in the field. Spirit Agency created the “Einstein Kid” ad for Candia Milk that featured a brainy Einstein look- alike kid with the catchy tagline “Building Brains”. Instant reaction among the people was uniformly positive immediately after the visual was released.

The Pikasso Awards is an annual gala event celebrating excellence in creative outdoor advertising and communications.

Pikasso acknowledges winners in multiple award categories and for Spirit this is the fifth year in a row Pikasso recognition: Five years ago, the “play on words” campaign for Al Hadaf newspaper won the Pikasso Special Jury Prize. That was followed by the Mobilitop “giant lamp” unipole a year later. The year after, Symi Men Deodorant ads for Cosmaline got the Malls Award. Last year were the “Lifetime Apartments” mutlivisuals for Jamil Saab & Co that got awarded.

“I would like to thank Hani and his team at Spirit for their hard work and dedication for helping us achieve our marketing goals.We at Candia/LibanLait are super excited to have Spirit as a partner by our side to help us succeed” says Mr Najib Abboud, Sales and Marketing Manager, Libanlait.

Spirit has been formally recognized for its high quality and valued creative campaigns. “Comprised of a vibrant and dedicated talent pool across offices in Beirut and Dubai, Spirit has consistently ranked among the top independently owned agencies in the region since its inception in 2004. By putting the most seasoned professionals on the front lines of each piece, Spirit consistently exceeds expectations through creative insights, ideas, and execution.” says Mr Hani Haddad,CEO, Spirit.