Special Weekly Leaks: Zuma to open in beirut in 2012 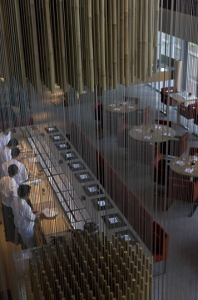 ZUMA Dubai, the popular restaurant and bar concept now in its third successful year of operation, today announces its plans for Middle Eastern expansion, beginning with ZUMA Beirut. Set to open in early 2012, the Beirut property represents the first step in a regional roll out driven from Dubai that will see the proven ZUMA formula repeated across a number of cities in the Middle East.
ZUMA Beirut will enjoy a prime location in the heart of historical Downtown Beirut, in a site within Le Gray Hotel.

Overlooking the Mediterranean and Mount Lebanon, the new site is within walking distance from major business corporations and cultural
attractions and just 15 minutes from the International airport. The association between ZUMA and Le Grey underlines an exciting synergy between two design led, highly successful hospitality concepts, and will firmly put Beirut on the map as the
global city of the moment. The announcement of the expansion comes just weeks after ZUMA Dubai posted a
record-breaking start to the year. Of the expansion, Director of Operations, ZUMA

Middle East, Ajaz Sheikh states: Since our opening in Dubai in 2008, we have always been looking at opportunities for
further expansion in the Middle East. The past three years have allowed ZUMA to integrate itself in the Middle East culture and learn how to do business in this region. Beirut is a vibrant city with a unique energy and it seems fitting to open our
second property in the heart of its Downtown district. Needless to say, the team and
I are very excited about embarking on our new project.”
www.zumarestaurant.ae