Spain VS Netherlands: A New Episode in the books of history 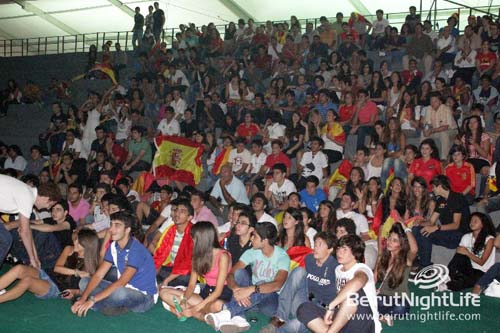 Tonight is the final game of the Fifa World Cup 2010 between Spain and Netherlands. The two teams are set to write a new page in history tonight for the first time ever since both have never clinched the title before.

The Oranje have been the most stable and focused team in the tournament with a perfect score in all its games. Netherlands managed to win its games against, Denmark, Japan, Cameroon, Slovakia, and Uruguay. The La Roja on the other hand lost the first match against Switzerland before they managed to win against Honduras, Chile, Portugal, and the mighty Germans.

The only thing left to know who will be the holder of the cup is 90 minutes of sweat and blood, and the name will be engraved in the books of Fifa World Cup History.

Now!!!?? Where will you watch your final game??

Each four years, you will have to answer this question, BeirutNightLife.com brings you pictures of the Ultimate Destination in Lebanon to watch the FIFA World Cup 2010 final game. You can watch it now in style, you can live the hype just by visiting one of the biggest locations to have ever been placed in Lebanon the Beirut WorldCup Fan Park with official sponsors such as Solidere, Adidas, and Sony and many more.

Who will clinch the title tonight??? Spain or Netherlands??? Who will put a World Cup star on their shirt for the first time ever tonight???