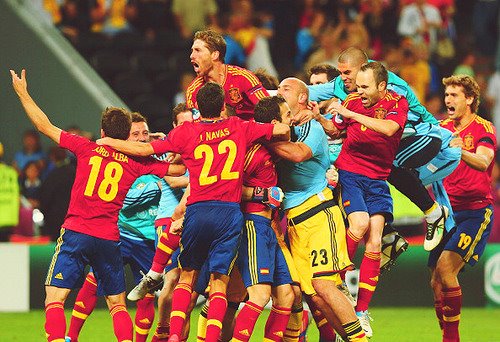 La Roja progressed to yet another final in three of the biggest international soccer tournaments after defeating Portugal in shoot-out level at 3-2  in the Euro 2012 semi-final at the Donbass Arena.

Neither did Spain display their usual control and style of football during the 120 minutes, nor Cristiano Ronaldo & Co. had chances to score against Casillas. The game went to extra time with Spain pushing to score and not go to the penalty shoot outs, again the Spaniards failed to score.

Both teams got off toa bad shot as Patricio and Casillas both saved from Alonso and Moutinho penalty kicks. Iniesta, Pepe, Pique, Nani and Ramos all scored before Bruno Alves lost the chance to keep the score tie to make the score 3-2 to Spain after four penalties each. The Barcelona midfielder netted the decisive shot to book Spain another date in the showpiece event in Kiev on July 1, to meet the winner from Italy and Germany in the final game.