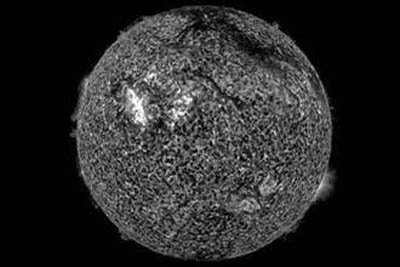 The Earth is in the path to be hit by a wave of violent space weather as early as Tuesday after a massive explosion of the sun that happened few days ago, scientists have warned. Astronomers witnessed the huge flare above a giant sunspot the size of the Earth, the explosion aimed directly towards Earth.

It sent a “solar tsunami” racing 93 million miles across space, which is likely to hit the planet on Tuesday. The wave of supercharged gas is likely to spark spectacular displays of the aurora or northern and southern lights. However, a really big solar eruption could shut down global communication grids and destroy satellites, if it reaches today.

A recent warning by NASA said that Britain could be at the receiving end of widespread power blackouts for a long time after the earth is hit by a once-in-a-generation “space storm.” “This eruption is directed right at us,” Leon Golub, of the Harvard-Smithsonian Center for Astrophysics (CfA), was quoted by The Telegraph as saying. “It’s the first major Earth-directed eruption in quite some time.”

“It looks like the first eruption was so large that it changed the magnetic fields throughout half the Sun’s visible atmosphere and provided the right conditions for the second eruption,” The Telegraph quoted Dr Lucie Green, of the Mullard Space Science Laboratory, Surrey, as saying. “This means we have a very good chance of seeing major and prolonged effects, such as the northern lights at low latitudes,” she added.