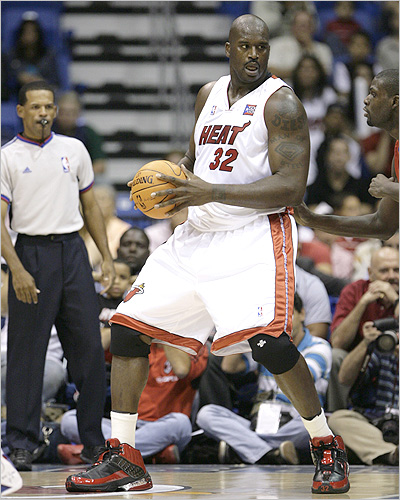 The Shaq Attack has landed in Boston after the legendary basketball star Shaquille O’Neal signed as a free agent with last year’s NBA Eastern Conference champions the Boston Celtics.

The 7ft 1in, 325-pound centre signed a two-year contract with the Celtics and becomes part of the all-star team including Kevin Garnett, Paul Pierce, Ray Allen, Jermaine O’Neal and Rajon Rondo. The Green Monster, now 38, is a four-time NBA champion and three-time NBA Finals MVP.

The Celtics will be his sixth team of an an amazing 18-year career for the giant. The 15-time NBA All Star spent last season playing alongside LeBron James for the Cleveland Cavaliers – who were knocked out of the playoffs by Boston. The Celtics will tip-off the 2010-11 season on October 26 against LeBron’s new team the Miami Heat. Another former teammate of Shaq, Dwyane Wade, is also likely to be playing for Miami in an exciting opening-night matchup.