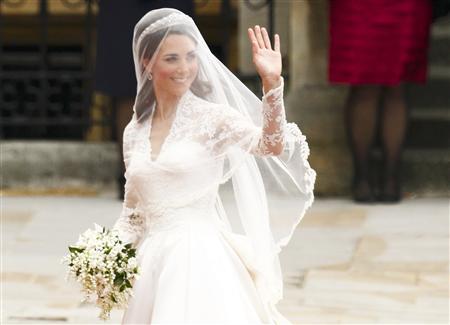 Around 2,000 guests – from royalty to celebrities – thronged the Abbey as Kate, in a lace-topped dress by late British fashion designer Alexander McQueen, was led down the aisle by her father, Michael Middleton.

Prince William dressed in the scarlet uniform of the Irish Guards, had a nervous 45-minute wait inside the abbey, which was decorated like an English garden with an avenue of field maple trees. Kate will carry the official title of Catherine, the Duchess of Cambridge, but she will also be known as Princess William Wales.

Outside the abbey, and along the Mall up to Buckingham Palace, large crowds had already gathered at dawn on Friday, waving paper flags and cheering and shrieking as the royal cars swept past.

Thousands had camped overnight and up to a million were estimated later to line the route from the abbey back to Buckingham Palace.