Ricky Gervais Will Not Apologize for Anything 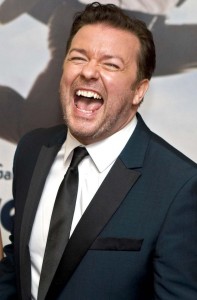 Ricky Gervais is standing behind everything he said at the 2011 Golden Globes and refuses to apologize for any of it.

I’m not sorry for anything I said, because I’m not going to apologize for being true to myself,” Ricky told Piers Morgan on Piers Morgan Tonight. “I don’t care what people think of me. I care if I’ve done a good job, and I care if I’ve told the truth.”
If any of the celebrities Ricky directed jokes at during the show took offense, he doesn’t care.
“Just because you’re offended, it doesn’t mean you’re in the right,” he told Piers “A lot of people are offended by mixed marriage. It doesn’t mean they’re right.”

Did he over do it? Will he host next year’s Golden Globes?