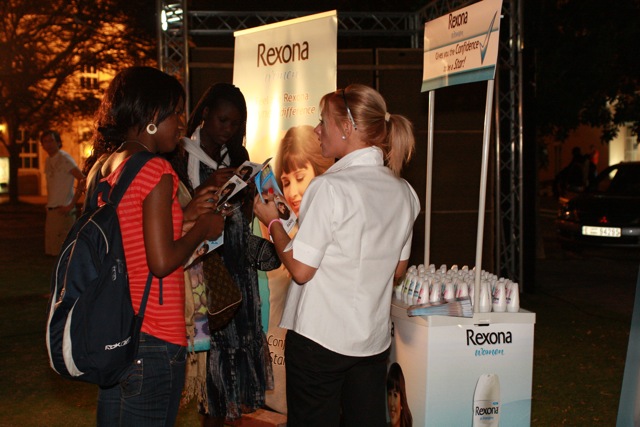 Rexona, one of Unilever’s leading Personal Care brands has been providing students across the region with confidence-boosting tips. Rexona has been marking its presence in career fairs and educational exhibitions in an effort to reach and educate more students.

Personal grooming and hygiene are important in making one feel confident when facing other people. When you sweat or smell in front of other people, you become conscious, you feel less confident and you tend to hold back.

“We all sweat, even in air-conditioned environments. When we sweat in the underarms, it mixes with bacteria that causes body odour. Even frequent bathing won’t be enough to address body odour”, explains Kenneth Lingan, Marketing Director, Unilever Gulf.

Women in this part of the world are well educated on the need for bathing daily and are even sophisticated enough to see the importance of using make-up in making a perfect impression to others. However, not all women realize the importance of using an antiperspirant everyday as part of their daily grooming routine. In fact, research shows that only 7 out of 10 women in the Gulf region use an antiperspirant everyday.

“The majority of people in this part of the world cannot really differentiate between a deodorant and an antiperspirant and we believe we have a major role to play in educating them”, explains Lingan.

There is also a misconception that using a deodorant, body sprays or perfume is enough to do the job. The problem with these products is that it just masks the smell but they do not really tackle the root cause of body odour which is underarm sweat.

The ideal solution to preventing body odour all day is to use an antiperspirant such as Rexona after every shower. It effectively controls underarm sweat that causes body odour. If women understand the primary cause of body odour and how to properly take care of it, then they would most likely include antiperspirants in their daily grooming ritual.

“This is why we are embarking on a massive campaign to reach out to at least 250,000 women in the Gulf region and educate them on the need of using an antiperspirant after every shower,” explains Lingan.

When asked about some of the reasons behind the relatively low-consumption rates in the region, Lingan was quick to highlight, “Some people believe that bathing is enough but bathing every day, once or twice or even three times is not enough by itself. The moment we finish bathing, our body produces sweat and this invariably ends up being body odour.”

Rexona, the world’s number one antiperspirant is relied on by millions of people around the globe to help them stay dry and confident. It contains a unique dual formula that absorbs sweat like a sponge absorbs water while preventing odour-causing bacteria from forming.

Rexona will continue to roll out programs aimed at educating students moving into 2011 with an eye on expanding both the scale and reach of its campaign.

What kind of feeling is a better feeling than walking away knowing that you are carrying all the confidence in the world to handle whatever the day has in store for you because you know your antiperspirant just won’t let you down!