Red Bull Stratos: Mission To The Edge of Space 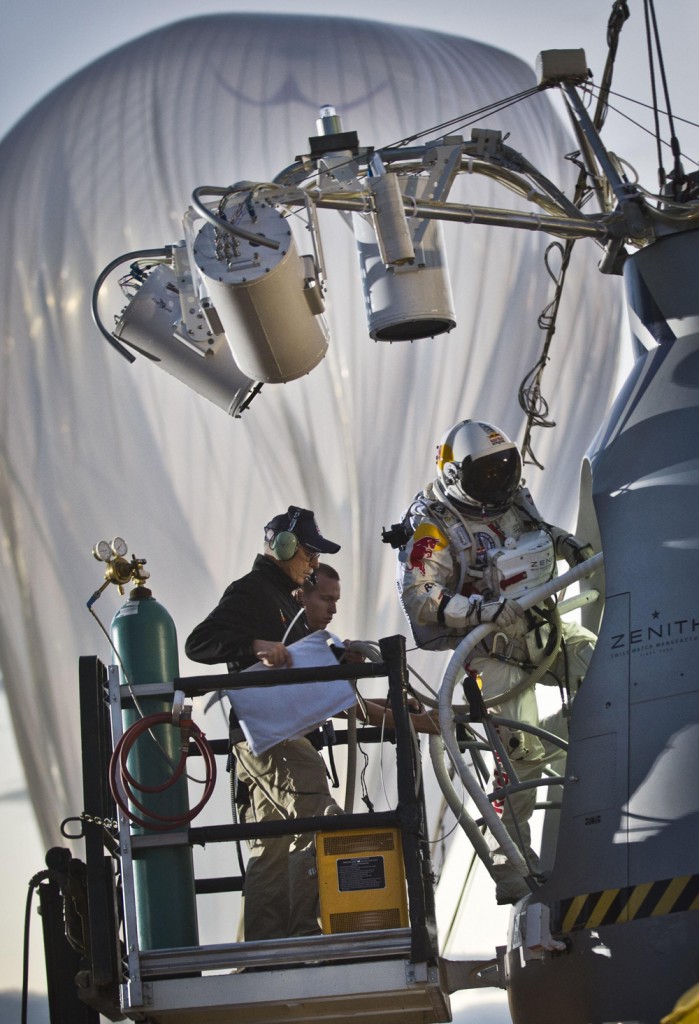 Did you know that record-breaking skydiver Felix Baumgartner, backed by a team of world-leading scientists, engineers and physicians, is on a mission to re-write the history of mankind?

In the process, felix could potentially break four world records:

On the night of October 5–6, the mission team conducted a step by step dress rehearsal of the final hours before the Red Bull Stratos launch. A successful result, with the addition of a favorable weather report, has heightened the team’s anticipation for a lift off on Tuesday, October 9.

At 11:00pm Mountain Time, the entire crew assembled to practice the 58 steps that will take the mission from a preparatory weather briefing all the way through to a dawn launch of the  55-story high balloon. The rehearsal is a vital component of preparation for every jump as it enables the teams from all four areas of responsibility to consolidate their checklists into one seamless process.

“Rehearsal is critical,” said high performance director Andy Walshe. “Everything went wonderfully well and the crew was on their game. A couple of times we were ahead of schedule, which is really reassuring. It gives us a sense of confidence.”

It was a long night for the balloon and capsule crews out on the runway, as temperatures dipped to around 45°F/ 7°C, accompanied by drizzle, which made it necessary to cover the capsule with a protective tarpaulin. Understanding the need to coordinate his activities with those of other crew members, Baumgartner participated too, undergoing a medical check, getting suited up and entering the capsule using the same activation plan that will be implemented at the final launch. “You cannot do this without a team to support you,” the Austrian noted after the rehearsal was successfully completed at 6:30am Mountain Time.

“Things need to be on time because the weather window is so small sometimes and these rehearsals get us cleaned up,” explained skydiving consultant Luke Aikins. “Every piece added through these practices has led up to this being our best rehearsal so far.”

Equally reassuring was the news from meteorologist Don Day, who had studied forecast data throughout the night in Mission Control. After a 24-hour postponement due to an unfavorable weather forecast, Tuesday October 9 continues to look promising for the launch. In the days leading up, the team will make minor adjustments to the rundown, even refining the language in which checklists are written to ensure that all crews are absolutely synchronized.

“The one-day delay gives us an extra day to go over things,” Walshe commented. “We must be patient. We will get him up there – and once we do, you will never forget it.”