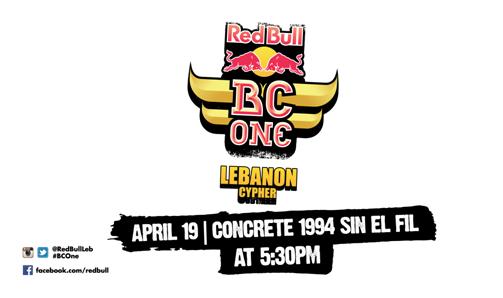 Preceding the Cypher, a qualifier will take place at Ain El Mreyseh (facing McDonald’s) on Friday, April 18, during which around 60 B-Boys will compete, and 16 will get the chance to go head to head in the national Cypher.

The region’s second Cypher, after Egypt’s, hype is building in Lebanon in what is expected to be a diverse and exciting battle. The 16 B-boys will perform in front of three Red Bull BC One international All-Stars who will judge the competition: Ronnie from the U.S., Cico from Italy, and Lamine from Senegal.

Lebanon’s Hip Hop, music, dance enthusiasts and the media are all invited to witness breaking at its best, and enjoy the battles which will crown the winner who will represent Lebanon at the Red Bull BC One Middle East & Africa Finals on September 27th, in Algiers, Algeria.

Two-time BC One Lebanon Cypher winner and holder of the title, Ralph Kabalan, said of the competition: “I am extremely excited to be going head to head against this year’s best 15 B-Boys, introducing new moves and tricks to the floor. I hope I will be able to defend my title once again, and to get the chance to represent my country in this year’s Regional Finals in Algeria!”

Set to take place in Lebanon for the third year, Red Bull BC One provides the one and only platform where B-Boys can showcase their skills and talent, and show to their audience what they’ve got to offer. The level of competition is set to impress with competitors coming from diverse areas and regions of the country.

The event, which will also be followed by a workshop the next day, will harness the All-Star B-Boys’ experience to train the Lebanese B-Boys on the techniques of breaking, with the aim of honing their skills, which in turn will culminate in world-class performances on the floor.

B-Boying, one of the four pillars of urban art, has a long and rich history, with breakers having elevated the dance into an art form over the years. Communal and competitive, talented B-Boys seek to showcase their moves against the world’s best, and Red Bull BC One has become recognized as the scene’s pioneer one-on-one tournament, attracting challengers and fans from across the globe.

Last year, around 400 people watched B-Boy Ralph clinch the title in Lebanon’s iconic BO18, where they witnessed superhuman feats of physical strength and innovation, and an all-out celebration of the evolution of Hip Hop culture today.