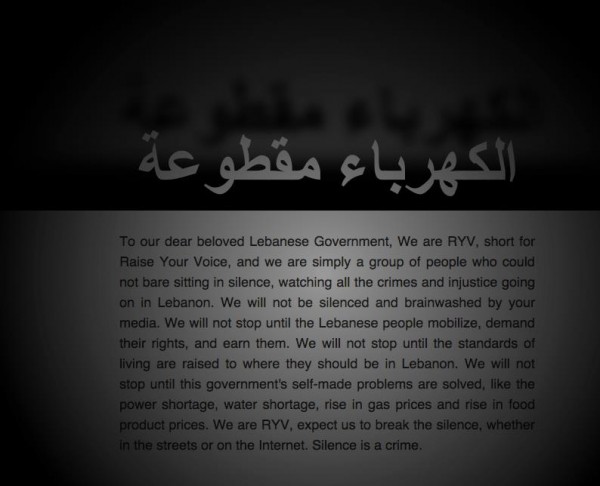 A group of people called RYV ‘Raise Your Voice’ hacked around 15 government websites this morning, including the following in their message:

“We are RYV, short for Raise Your Voice, and we are simply a group of people who could not bear sitting in silence, watching all the crimes and injustice going on in Lebanon. We will not be silenced and brainwashed by your media. We will not stop until the Lebanese people mobilize, demand their rights, and earn them,” they said.

And concluded with, “We will not stop until the standards of living are raised to where they should be in Lebanon. We will not stop until this government’s self-made problems are solved, like the power shortage, water shortage, rise in gas prices and rise in food product prices. We are RYV, expect us to break the silence, whether in the streets or on the Internet. Silence is a crime”

Some of the government websites that were hacked include those of Foreign Affairs, Justice and Energy, State Security, ISF, Customs and the Banking Control Commission of Lebanon.

Government websites were not the only ones targeted. The websites of the National News Agency as well as MTV were hacked too.

Do you think the government will listen to the complaints of the Lebanese people this time? Do you think a change will happen? Let us know!