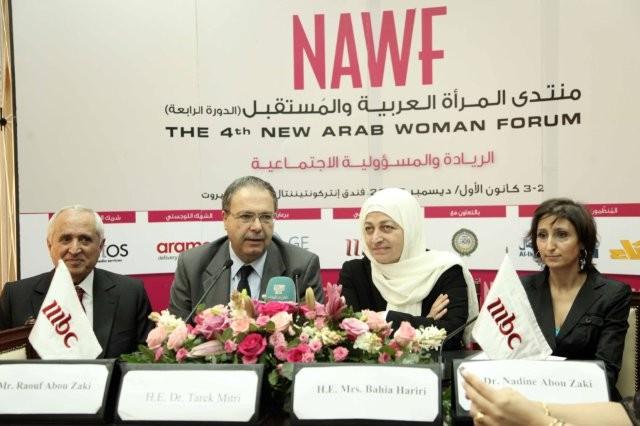 A press conference was held at the Ministry of Information to launch the 4th annual meeting of “The New Arab Woman Forum (NAWF)” in the presence of Minister of Information, Dr. Tarek Mitri; The Honorary President of the Forum, Bahia Hariri, CEO of Al-Ikissad Wal-Aamal Group Raouf Abou Zaki, NAWF Executive Chair Nadine Abou Zaki, and a large attendance by representatives of the media.
NAWF, in its 4th session will be held under the main heading “Leadership and Social Responsibility” and will take place at the Phoenicia Intercontinental Hotel, Beirut on the 2nd and 3rd of December 2010 under the high patronage of the First Lady of Lebanon Wafaa Michel Sleiman. The Forum is organized by Al-Iktissad Wal-Aamal Group and Al Hasnaa Magazine in cooperation with the League of Arab States and mbc Group.

H.E. Dr. Tarek Mitri opened the press conference by welcoming all those present and then proceeded to describe the strengths and main distinguishing features of the forum in its fourth round and its previous three rounds saying that it has hosted women (and a few men) from diversified origins and sectors, and from several Arab countries, as well as European countries, and discusses vital issues related to women and society and topics with a high level of seriousness, confidence and responsibility. Dr. Mitri concluded by wishing the forum success and expressing his belief that it will leave a shining mark in Beirut, “the city that always opens up to welcome its Arab sisters and brothers”.

The Honorary Presidency of the Forum, Bahia Hariri thanked Dr. Tarek Mitri for hosting the press conference at the Ministry of Information which she said has always been an edifice of liberty and freedom of expression in Lebanon, the Arab world and the whole world as well.  Hariri added:

“Through its media, our city has continuously reflected the nation’s pains and aspirations from brothers and friends. In Beirut, all the aggrieved found their adherents through special brotherhood and friendship, until this city, thanks to its people and media, has become the capital of Greater Lebanon in all its components, agonies, wounds and aspirations; a capital for freedom, creation, and inspiration.

To meet in Beirut is not tied to any conditions, whether security or economic, political or combative. Beirut is always and under all circumstances a city that is capable of protecting liberties and freedom of expression. Even though Beirut was just to all those who deserve justice, it is now oppressed when the various media do not shed enough light on the intensity and vitality of conferences and forums that take place in this city. My wish for my friend H.E. the Minister of Information is to arrange the publication of a newsletter on weekly, bi-weekly or even monthly basis that covers conferences, seminars, forums and other meetings in all sectors, so that the Lebanese people would be the first ones to know before others that prosperity lives under the constant political tensions that can not stand in the way of  the will to live, work, engage in dialogue, meet and create in Beirut, the capital of all Lebanon…”

Hariri concluded by saying: “I seize the opportunity to express my deep appreciation to a friend and brother, Raouf Abou Zaki a distinguished Lebanese figure who has become a necessity to all his brothers and friends, and to all those who want to come together in Lebanon and outside through his conferences and forums, and through Al-Iktissad Wal-Aamal Group and its distinguished team. Allow me also to express my bias towards the daughter of Saida, Nahla Zaatari and to acknowledge her exceptional efforts and contributions to Al-Iktissad Wal-Aamal Group”.

Nadine Abou Zaki is sharing with this forum her transparency, expertise, kindheartedness; and appreciation of the challenges that Arab woman are facing…She is giving for this forum all that it needs in terms of effort and efficiency, to keep Beirut the city of dialogue and a place where brothers and friends can look towards the future.

We hope that Lebanon will overcome its current passing challenges, the way it overcame enormous challenges 21 years ago when Lebanese will took to the fore to agree on the national accord document, to launch a rally for unity, rebuilding and liberation, and to ensure the failure of all bets on the inability of the Lebanese people to prevail against disintegration, Diaspora, occupation, wounds and destruction.

Today we meet again to prove this determination, and to welcome Arab woman and their bright and promising future in NAWF 2010, to which we wish all success, and to Lebanon stability and prosperity.”

The CEO of Al-Iktissad Wal-Aamal Group said: “The fact that this forum is being held for the fourth time is sufficient proof of its success, and as in its previous three sessions, the forum in its fourth session will attract the participation of new leaders and personalities from the Arab world and the world, and will once again highlight its status as an active framework for promoting women’s issues, as well as broader social issues. The Forum will be attended by: H.E.  Rachida Dati, Member of the European Parliament and Former Minister of Justice in France;  H.E. Lawyer Nariman Al Roussan, Member of the Jordanian Parliament;  Malek Chebel, Anthropologist and Author in France;  Mona Wassef, the Syrian Actress, and other prominent figures.”

Abou Zaki added that: “The holding of this Forum in Beirut under the patronage and in the presence of Lebanon’s first lady  Wafa Michel Suleiman and the active participation of its honorary president HE  Bahia Hariri gives it a strong boost and contributes to its success and its ability to attract the participation of leaders. The forum is expected to gather more than 400 participants from 20 Arab and foreign countries.

At the same time, the success of the previous three sessions is evidence of the vital need for the Forum as the Arab world goes through major economic, social and cultural change. Arab society had been waiting for such a forum to discuss issues of women, the family and society openly and bravely, especially that Arab women have made major advances in all areas and have become important players in economic, social and cultural life in the region.

Abou Zaki concluded by expressing appreciation of “the considerable support that the Forum has enjoyed from HE  Bahia Hariri, a wise and courageous lady who is also a worthy example of the success of the Arab woman and her major contributions in determining the future of society and its new generations.”

NAWF Executive Chair Nadine Abou Zaki said: In its socio-economic dimensions, social responsibility is certainly taken into serious consideration by corporations and financiers in the Arab world. But its importance has yet to reach the degree of interest in the West.  In the United States, for example, social responsibility is a key concept in the structuring of companies, which then move within the guidelines of  laws that encourage them to finance educational, social and cultural projects, such that total spending on such projects exceeds 2 trillion dollars.”

Nadine Abou Zaki stressed the need not to forget the importance of media, art and culture in social responsibility, and said that this topic that will be a point of focus in more than one panel at the forum.