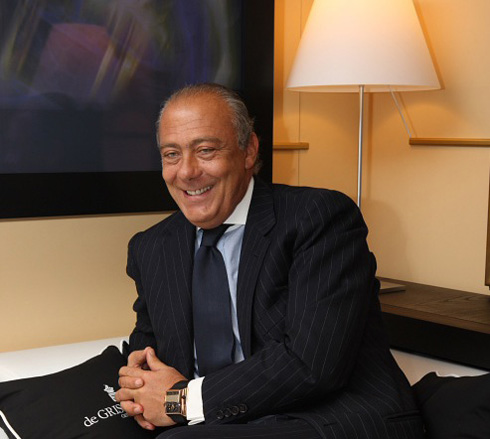 Fawaz Gruosi born on August 8, 1952 for a Lebanese father an Italian mother. Fawaz left Lebanon in 1961, and took his mother’s surname Gruosi. He dropped out of school when he was just 18, an adolescent not knowing exactly how to charter the future course of his life, when his mother suggested that he explores life and make some pocket money. Following his mother’s advice, Fawaz took up a job in a jewelry shop, in Florence, and here was the spark of a great career in jewelry designing and manufacture.

He worked for about 20 years for some of the world’s finest jewelry houses (Harry Winston, Bulgari…), presenting masterpieces of jewelry. During this period he gathered enough experience in the art of jewelry designing and manufacture that elevated him to the position of a world class designer and manufacturer. But, in this capacity there was only limited scope for him to apply his novel and innovative ideas as a highly imaginative jewelry designer. Besides this, Fawaz had always nurtured a dream of becoming an independent designer and setting up his own business to create jewelry under his own name. 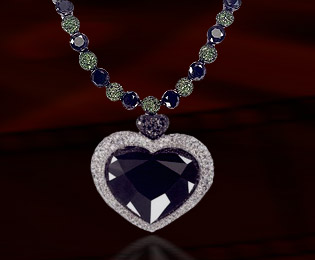 In pursuance of this dream, Fawaz established the first company in partnership in 1993, but subsequently, in 1995, he became the sole owner of the company. Having become an independent entrepreneur, Fawaz had the total freedom to make his own decisions, and take bold and novel initiatives, which his traditional counterparts would not even dare to. “The principal of creativity to do something different is my credo.” says Fawaz, in an interview given to Monita Ragpal of the CNN in February 2006.

In 1996, Fawaz launched the de Grisogono brand name, by opening the first de Grisogono boutique on rue du Rhone, Geneva.  This was the same year that Fawaz got the inspiration to try something different and venture into a hitherto unexplored field, the world of black diamonds. It all started when he was browsing through a book and accidentally came across a photograph of the famous 67.50-carat Black Orlov diamond. The photograph probably would have been, the Cartier’s setting of the cushion-cut Black Orlov, surrounded by contrasting white diamonds in a pendant, to a diamond and platinum necklace. Fawaz immediately swung into action. He took a trip around the world, scouting for black diamonds in all the diamond mining areas of the world, and was able to collect sufficient quantities of these previously under-rated stones, in different sizes, to embark on his daring experiment. In spite of the difficulties experienced in the cutting and polishing of these rough stones, they were eventually transformed into jet black beauties, by a team of black diamond cutters, based in Antwerp.

Fawaz, then went about the task of setting these diamonds into exquisite jewelry, with unique and creative designs characteristic of the magical touch of Fawaz. He built up a breathtaking jewelry collection, consisting of necklaces, earrings, bracelets, and rings, based on the black diamonds. To bring out the contrast in colors, he always associated the black diamonds, with other gemstones, such as, white diamonds, gray icy-diamonds, pearls, rubies, emeralds, sapphires etc. 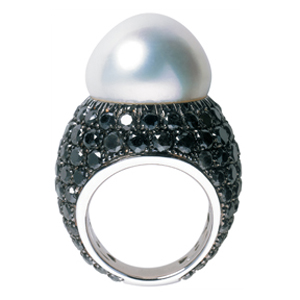 With the success of the de Grisogono black diamond jewelry, new boutiques were opened in London and Gstaad. Then more outlets followed in quick succession, in Rome, Paris, St. Mortiz, Kuwait, Moscow and Hong Kong. These nine shops were opened within a period of twelve years. Truly the growth of the de Grisogono chain of outlets had been phenomenal, thanks to the growing popularity of the black diamond jewelry. “We are still in the process of growing and we need to keep growing for at least another 7 to 10 years. And to grow you need milk and in this case the milk is cash.” says Fawaz, in the interview with CNN’s Monita Rajpal. He further said, “I wouldn’t like people could find my products, everywhere. If we go to our shops in Geneva and New York, you will not find the same pieces. I keep it very exclusive in that way.” The company has now grown into a global empire, with a network of 140 points of sale around the world, which includes besides de Grisogono Boutiques, other authorized distributors as well.

Fawaz Gruosi is married to Caroline Gruosi Scheufele,  heir to the rival jewelry business, Chopard. Fawaz met Caroline when he was just 21. At that time they were working for different companies. They got married, yet their business interests were kept independent of one another. A beautiful mutual relationship emerged between husband and wife, exchanging constructive criticism, advice and support for each others ventures. Chopard grew into a mighty watch-making and jewelry firm long before Fawaz started his own de Grisogono watch-making and jewelry company. Fawaz Gruosi’s de Grisogono company went into partnership with his spouse-owned business Chopard, in 2002, in order to provide a sound financial base for  the growth of de Grisogono. Fawaz Gruosi owns 49 % of the shares of de Grisogono’s capital, and Chopard owns 49 %, while the remaining 2 % serve as a guarantee. In this partnership Chopard makes it’s experience and know-how available to Grisogono, but in all other respects de Grisono remains independent of Chopard. Creation of watches and jewelry, distribution and marketing for the brand still remains the responsibility of de Grisogono. 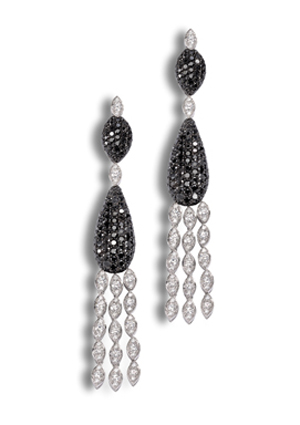 Having achieved phenomenal success in the jewelry manufacturing arena, within a short period, Fawaz turned his attention towards watch-making, and in the late 1990s unveiled to the world, a men’s watch set entirely with square-cut black diamonds, which became another instant success

He then created jewelry watches for Chopard, one of which was the highly innovative “Ice Cube Collection,” in which each watch was set with 76 perfect black diamonds. Encouraged by this success, Fawaz decided to launch into watch production in the year 2000, under the de Grisogono brand name. The company made a sensational debut into the watch-making world in the year 2000, with an unquestionably original model known as the Instrumento No Uno, which was unveiled to the world at the international watch, clock and jewelry fair in Basel. For this time piece collection Fawaz used black diamonds mixed with white diamonds or colored stones. The features of these unique watches were, square shaped case with slightly arced sides, a second time zone indicator, a large date aperture at 7.30, a grooved crown with an inset black diamond, automatic modified caliber, two tier dial, 42-hour power reserve, water resistant to 30 meters. The Instrumento  No Uno was a resounding success.

Following the success of the Instrumento No Uno in the year 2000, more innovative models followed each year :

According to Fawaz Gruosi his greatest surprise was the success of de Grisogono watches, which he had never thought would take off the way they did. The Instrumento De Uno which was launched seven years ago is still their best seller, and the sale of watches have now reached 50 % of the turnover of the company. Fawaz Gruosi attributes his success to the fact that he has his “feet on the floor”, is always original, never neglects quality, and keeps prices down.