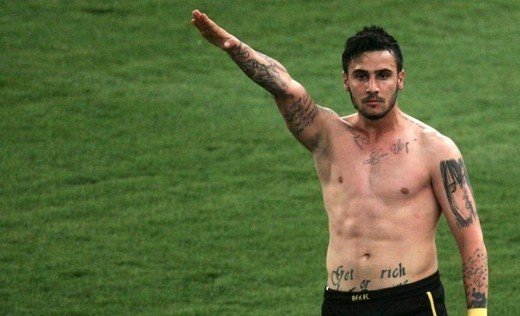 Giorgos Katidis, a 20-year old soccer player, has been banned for life from the Greek national team after he celebrated a goal this weekend by demonstrating the Nazi salute.

The incident took place yesterday after Katdis scored the go-ahead goal in AEK Athens’ victory over Veria in the Greek league.

The midfielder pleaded innocent to any meaning behind his gesture on Twitter, while coach Ewald Lienen said the player doesn’t have an “idea about politics.”

However, Greece’s soccer federation released a statement today that said Katdis’s straight-armed raise “is a deep insult to all victims of Nazi brutality.”

AEK fans, meanwhile, are pushing for Katidis’ dismissal from the team.

He has played for Greek national junior teams, but not the nation’s senior side. And now it looks like he never will.