Pink Rocks Out on the Cover of SHAPE 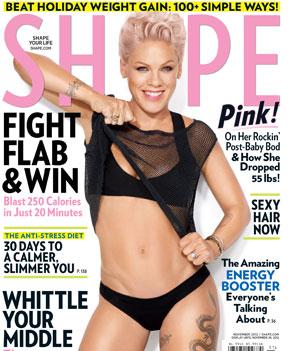 Looking at Pink on the cover of SHAPE, it’s hard to imagine that she gained 55 pounds during pregnancy! But after giving birth to daughter Willow 15 months ago, the star knew she wanted to kick the baby weight.

The super star says she wanted to “be kind” to her body the first months after pregnancy, and opted not to rush into losing weight. Ultimately, she started working out with both  Jillian Michaels and Jeannette Jenkins.

“They both kicked my butt more than any other person I’ve ever worked out with,” she says. And after losing the weight, Pink claims she’s now in the best shape of her life.

The singer-songwriter also reveals her more personal side, opening up about her experience as a drug addict, what finally encouraged her to kick her addiction for good, and her life as a new mom.

One thing’s for sure: While her tough-as-nails attitude isn’t an act, the wife (of motocross racer Carey Hart) and new mom can be as sweet as her moniker implies. Be sure to check out the November issue of SHAPE on newsstands now for more on her must-have healthy foods, her rock-solid abs workout, and all the details on her latest tour.