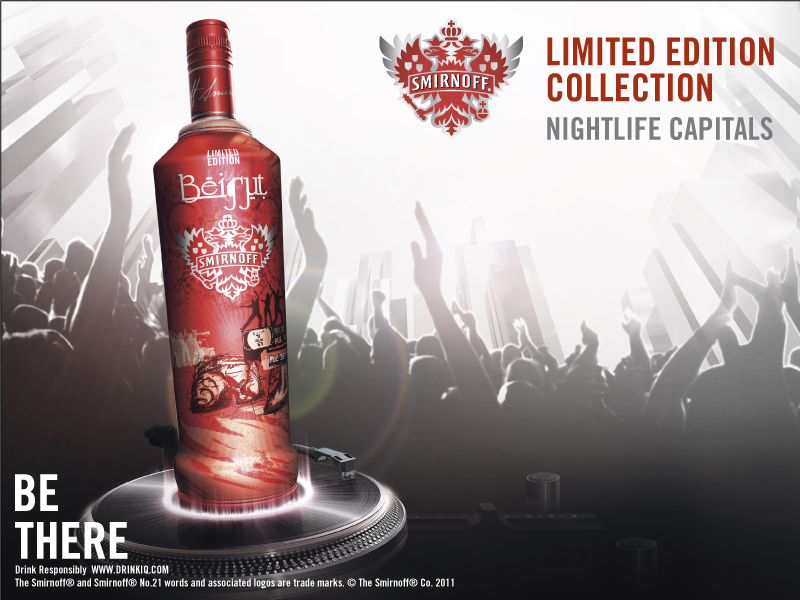 Launching the New Smirnoff Limited Edition Bottle Packs, Honoring Legendary Nightlife Cities around the world. Last year, Smirnoff launched The Smirnoff Nightlife Exchange Project – a groundbreaking initiative which saw 14 countries around the world, including Lebanon, swap nightlife on the same night. This year, Smirnoff has searched the globe for the most exciting locations that stood out for having unique, unforgettable and vibrant nightlife: New York, London, Rio de Janeiro, Sydney & Beirut! 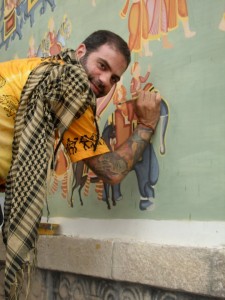 How did you go about designing the bottle?

I was approached by DIAGEO, and was briefed on the project which I felt is very exciting and challenging. The idea of working a design for a world wide known brand alone is a big incentive for challenge, let alone the idea that other artists from around the world are working on the same theme.

After the briefing and looking at other finished packs, I worked on several mood boards that kind of define the mood and feel of the city (Beirut) and based on that I produced several directions for the design. Of course the process was arduous with a lot of back and forth, brainstorming with DIAGEO and JWT (advertising agency of Smirnoff) over the design elements to be used, color schemes, overall mood and details. It was a process that took around 2 months before reaching the final look, and from then on it took a few more weeks to adjust and finalize little details.

Did you collaborate with other designers of other countries?

No, as Smirnoff guidelines are the only common thread linking all the bottles together and because each city has its own unique theme, I don’t think there was any need for any two artists to collaborate together.


What does every detail reflect? How is Beirut expressed through the bottle?


The first thing that strikes you when you look at the Beirut design is the Raouche rocks that represent an iconic landmark of the city.  Next you see the silhouette figures dancing on top of street signs which represents partying on roof tops and urban street signs we see in Hamra and Gemmeyze. On the back of the bottle you see modern Beirut city scape and silhouettes of people dancing on the streets to convey Down Town Beirut. Last but not least, you see the word Beirut which is a Latin font that I have reworked to read in both English and Arabic at the same time to convey the multi lingual aspect of our culture.

The over all look is a little grungy reflecting the crowded and muddled juxtaposed different vibes of the city. This is shown through the graffiti-ish rendering of the Raouche rocks, dancing silhouettes, and paint spatter effect in the background.


How challenging was it for you to put all of what Lebanon’s nightlife is about in one bottle?

It was very challenging to be able to narrow down the many elements that make up  the vibe of Beirut into a few elements that are very different in nature and make them all work together in one solid visual. Thanks to the professional feedback from DIAGEO and JWT teams every step of the way that led to a result that we are all happy with.