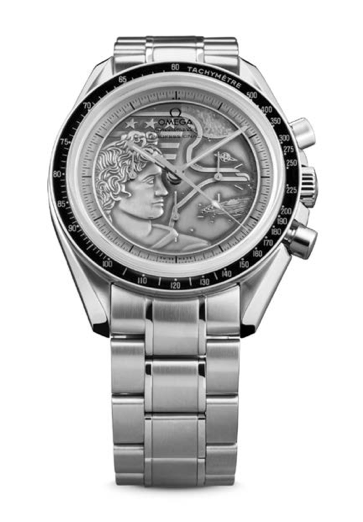 In December 1972, NASA’s Apollo program came to a successful end as Captain Eugene Cernan, commander of the Apollo XVII, became the last human being to leave footprints on the lunar surface.

Astronaut Eugene Cernan commented on the Apollo XVII mission and OMEGA’s role in past and future adventures saying: “History will not record Apollo XVII as the end, but rather the beginning. Our legacy will inspire future generations to once again take us where no human has gone before – and the OMEGA Speedmaster will be their companion”.

OMEGA’s Speedmaster Moonwatch “Apollo XVII” features a 925 silver, hand-patina dial embossed with the Apollo XVII patch which captures Man, the Future, the Recollection of Apollo and the Flag. The unique and striking dial and its blackened hands are protected by a scratch-resistant sapphire crystal on a 42mm polished and brushed stainless steel case with a black tachymeter scale, and is presented on a stainless steel bracelet.

The impressive screw-in caseback is engraved with “THE LAST MAN ON THE MOON”, “DECEMBER

OMEGA is a company of the Swatch Group, the largest manufacturer and distributor of watches and jewellery in the world.OMEGA PRESS INFORMATION 11 October 2012 2 /2

At the heart of this manual-winding chronograph is OMEGA’s 1861 calibre, the same reliable movement used in the legendary “Moonwatch”.

This historical timepiece, representing a legacy and a hero, has been produced in an edition limited to 1,972 pieces, and is water resistant to 5 bar / 50 metres / 167 feet.