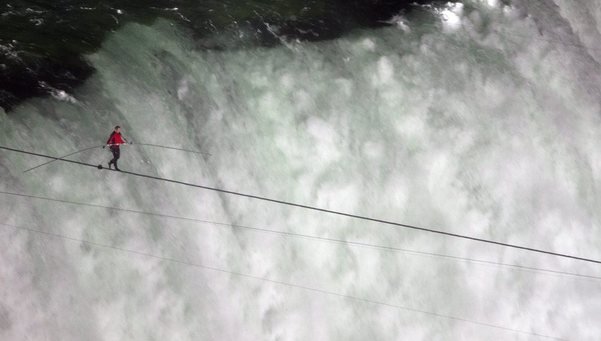 His insane 1,800-foot journey over the roaring waters of Horseshoe Falls, the largest of the three waterfalls that constitute Niagara Falls and separate Canada from the U.S. in Western New York State, makes the term “daredevil” sound almost passe.

“I hope what I I just did inspires people around the world to reach for the skies,” Wallenda, 33, told reporters after his fear, which aired on ABC.

He said he was “on cloud nine” after braving blinding mist and “wind coming from every which way” on his 30-minute international tightrope walk.

“There was no way to focus on the movement of the cable,” he said. “If I looked down at the cable, there was water moving everywhere.”

Conversely, he added, “If I looked up, there was heavy mist blowing in front of my face. So it was just a very unique, a weird sensation.”

That’s putting it mildly. So how did Nik, who paid homage to his circus family, the Flying Wallendas, possibly make it through such a harrowing stunt?