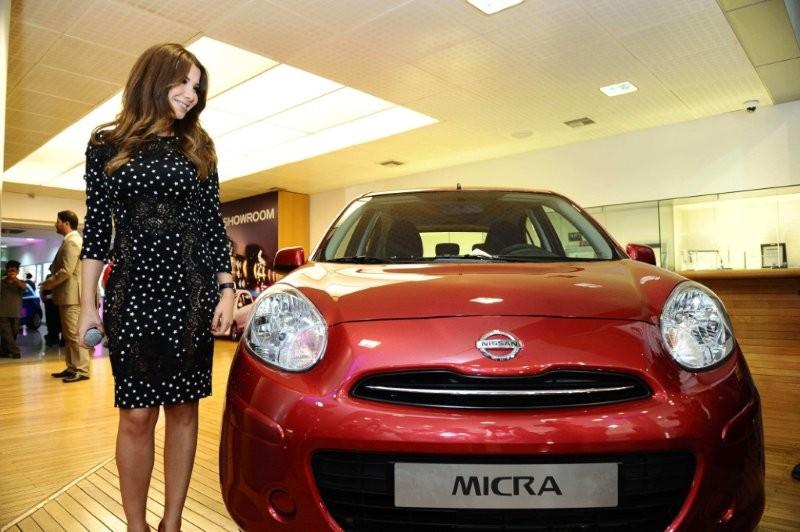 International superstar Nancy Ajram has officially launched the all-new 2012 Nissan Micra in Lebanon, at a special press conference at the Rasamny-Younis Motor Company S.A.L. (RYMCO) headquarters in Chiyah. The press conference was attended by high-ranking officials from RYMCO, Nissan Middle East and members of the press.

Nancy joined forces with Nissan as the official ambassador for the Micra, her favorite city car, which brings style and safety to the small car segment. The star wowed the audience with a special performance and also launched the Nissan Micra Facebook competition.

The competition asks contestants to be on the lookout for a specially branded Micra, which will be driving through the streets of Beirut during September. Daily hints will be posted on Facebook giving people clues as to where the Micra can be found. If people find the car, take its photo then upload it to the RYMCO Facebook page, they will be offered a special discount voucher on the purchase of the new Micra.

Fayez Rasamny, Chairman of RYMCO, exclusive distributor of Nissan in Lebanon, commented on the importance of safety in the small car segment. “With the increasing popularity of small cars in Lebanon, it’s really important that we do not compromise on safety. The new Micra is a step above the rest with ABS and 4 airbags as standard safety features,” he said.

The fourth generation of the iconic city car, the new Micra will set new benchmarks in the market for the light car segment and is on course to lead in its class as a powerful, safe, and fuel efficient city car.

Like its predecessor, the all-new Micra is expected to make a big impression as a refreshing new compact runabout. Reliable, stylish, accessible and maneuverable, it is bound to be enjoyed by a wide range of customers in various markets.

Its high standard safety features include Anti-Lock Brakes with Electronic Brake Force Distribution and Brake Assist, as well as 4 airbags; front, side and curtain airbags. In addition, the Nissan Micra will offer a range of convenience features such as a multifunction Drive Computer, air conditioning, central locking with remote keyless entry, power windows and mirrors, theft immobilizer and an outstanding sound system; radio, CD, mp3, auxiliary and 6 speakers.

The new Micra aims to attract a wider audience with its contemporary good looks, spacious and fashionable interior in addition to a powerful high performance engine of 1.5L with 97 Horsepower. The all-new Nissan Micra comes in five trendy colors to suit your personal preference as well as three grades to satisfy the various needs with a manual and two automatic transmission trims. In addition to all the features, all Nissan models come with 4 years warranty.

Purchasers of the new Micra will also feel secure as RYMCO has one of the best Aftersales Service Centers in Lebanon. Through their policy of excellence in quality and with Customer Satisfaction as their priority, RYMCO has spread its branches of Aftersales Service Centers to Chiyah, Jal El Dib, Monot, Zouk Mosbeh to provide our customers with professional service for all car related needs. A specialized team is also dedicated to around the clock road emergency services on a 7-day basis.