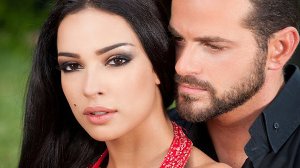 Lebanese actress and former Miss Lebanon denies rumors circulating around that she asked the producers of the hit TV drama, Ajial, on MTV, to replace actor Carlos Azar with Youssef El Khal. The reports said that she preferred Youssef to Carlos since Carlos has a baby face. Nadine denied these rumors and assured that she enjoys working with both guys.