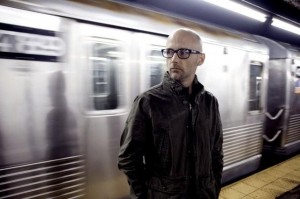 With over 20 million albums sold worldwide and hundreds of commercials and films using his songs, Moby is widely acclaimed as one of the most important figures in electronic music.

Pushing boundaries with his mix of ambient electronica, blues, and rock, he is set to deliver an explosive live performance.

Richard Melville Hall was born in New York City on September 11 1965. His middle name and the nickname “Moby” were given to him by his parents because of an ancestral relationship to “Moby Dick” author, Herman Melville. He started making music when he was 9 years old, playing classical guitar and studying music theory. During his teens, he played in various hardcore punk or post-punk local bands. He later dropped out of University where he was studying philosophy and started DJ’ing: he became a fixture in the late 80’s New York house and hip-hop scenes.

In 1991, Moby released his first single “Go”, a progressive house track using the string line from “Laura Palmer’s Theme” from the TV drama Twin Peaks. Listed as one of Rolling Stones best records of all time, it was his first breakthrough. He became a successful artist on the ambient electronic scene, and achieved eight top 40 singles during the 1990s bringing electronic dance music to a mainstream audience.

Moby released his first album, Everything Is Wrong, in 1995. It earned early critical praise (Spin magazine named it Album of The Year) and some commercial success. Disillusioned by the lack of feedback he was receiving from the music media who struggled to comprehend his new electronic music and refused to take it very seriously, Moby decided to release a punk rock album. Released in 1996, Animal Rights almost killed his career. The album’s aggressive sound not only left audiences cold but also confused people as to what kind of artist Moby really was.

In 1997, he released I Like to Score, a compilation album featuring electronic music that had appeared in various films released in the 1990s (James Bond film “Tomorrow Never Dies” and Michael Mann’s “Heat”…).

In 1999 he released the album Play, a mix of melancholic chill-out, ambient music, upbeat electronic, folk and blues, that was critically acclaimed and produced an impressive eight hit singles (including his most popular songs “Porcelain”, “Natural Blues” and “Why Does My Heart Feel So Bad?”). Play became a commercial success, selling over 10 million copies worldwide (the best-selling electronic album ever), with all its eighteen songs receiving an unprecedented licensing in films, television and commercial advertisements.

In 2002 Moby released the follow-up to Play, 18, which earned gold and platinum awards in over 30 countries, and sold more than four million copies.

In 2005 Moby released the album Hotel that spawned two of his biggest hits, “Lift Me Up” and “Slipping Away” and went on to earn gold and platinum awards in over twenty countries, with global sales of over two million copies. Instead of relying on samples for vocals, all of the vocals and instruments were performed live in the studio giving the album a modern rock flavor. He followed it in 2008 with Last Night, an eclectic album of electronic dance music inspired by a night out in New York.

Inspired by filmmaker David Lynch’s message at the 2008 BAFTA Awards (“creativity for its own sake is a beautiful, wonderful thing”), he recorded his next album largely by himself in his home studio. Released in 2009, Wait for Me is considered by fans and critics alike as one of his finest albums to date.

Moby’s tenth studio album, Destroyed, comes less than two years later, in May 2011. While he crafted portions of Destroyed at home, most of it was created during late nights on the road as he suffered from insomnia. Perhaps that’s why the album, in his words, sounds like “broken down melodic electronic music for empty cities at 2 a.m.”

Moby has also produced and remixed scores of other artists, including David Bowie, Gwen Stefani, Bono, Michael Stipe, the Beastie Boys, Public Enemy, among others. He collaborated on two duets with the French singer Mylène Farmer (“Slipping Away (Crier La vie)” in 2006 and “Looking For My Name” in 2008) and produced 7 songs for her latest album Bleu Noir.

Moby has toured extensively, playing well over 3,000 concerts in his career and headlining major music festivals like Lollapalooza or Glastonbury. He will be coming to Byblos with a full band for a mind-blowing show that will include all his greatest hits.