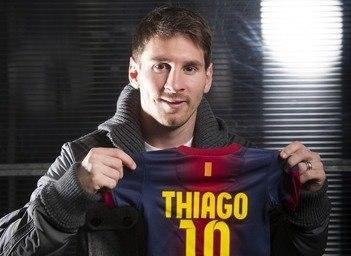 It seems strange to be talking about Lionel Messi’s legacy as the Barcelona maestro is only 25, but on Friday his girlfriend Antonella Roccuzzo gave birth to a boy whom they named Thiago.

When Messi hangs up his boots and defences finally get some respite from his wizardry, it might not be too long before another Messi is breathing down their necks.

The Argentina playmaker missed training to be with Antonella for the birth but Barcelona coach Tito Vilanova confirmed he was still in contention for selection for the match against Celta Vigo on Saturday.

‘In principle he’ll be available for the match,’ explained Vilanova. ‘It won’t change anything that he hasn’t trained for one day, it’s not significant.’

On Saturday Messi scored his 300th career goal, which came as the second of his brace against Rayo Vallecano.

Meanwhile Gerard Pique is close to a return after missing over a month with a foot injury, though he will not make Saturday’s clash.

‘He has been training more intensely for some days now and it’s a matter of a few days before he returns to work with us,’ Vilanova said.

‘It’s important to get players back (from injury), above all in that position, where Carles Puyol is also missing.’

Rugged defender Puyol has been missing since dislocating his elbow in gruesome fashion during the Champions League win against Benfica on October 2.