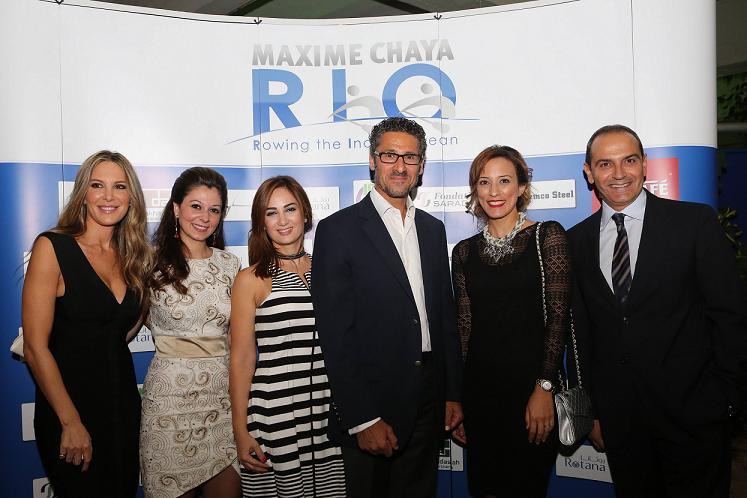 With the support of eight sponsors, mainly NESCAFÉ, Lebanese Sportsman, Mountaineer and Explorer Maxime Chaya and two teammates set a new world speed record this summer for rowing across the Indian Ocean in under 58 days. Expedition RIO — short for Rowing the Indian Ocean — also made them the first team of three to successfully row any ocean.

The achievements were recently celebrated at an event attended by over 200 people including ministers, Lebanese and foreign dignitaries, and members of the press. Representatives from Nestlé Middle East, Abbott Laboratories, Dar al-Handasa, Demco Steel, Fondation Saradar, Midis Group, Rotana Hotel Management, and Sukleen also attended the event held at the Automobile and Touring Club of Lebanon in Kaslik from where sea-trials were conducted some six months ago.

“Every time someone thanks me for the achievement, I turn around and thank my sponsors. Without their trust and support there would be no RIO,” said Chaya who is the Corporate Ambassador for Bank Audi, the institution that first recognized his potential and supported his expeditions.

“Maxime discovered his passion for adventure and challenged himself by first taking to the mountains, then the Poles, and very recently to the high seas,” said Nestlé Middle East Chairman & CEO Yves Manghardt. “He continues to be an inspiration to many and we couldn’t be happier that every day of his latest journey into history began with a cup of NESCAFÉ. Maxime, like NESCAFÉ, turns obstacles into opportunities through dedication, confidence and passion.”

“It was Lebanon’s very own Gibran Khalil Gibran whose 1925 The New Frontier emphasized the concept of “ask not what your country can do for you, but what you can do for your country,” later made famous by American President John Kennedy,” added Chaya. “I encourage my fellow Lebanese of all ages to realize that progress anywhere is also about what individuals and the private sector do to push themselves and their societies forward, regardless of the turmoil their country or region might be going through.”

Fifty one year-old Chaya’s 6,500 kilometer Expedition RIO was completed with 42 year-old Dane Livar Nysted and 33 year-old Stewart Kershaw from the UK, aboard an 8.8 meter boat baptized tRIO weighing 500 kilos empty, and some 1,600 kilos in total with all supplies aboard.

The three men, whose voyage began in Geraldton in Western Australia on June 8th and concluded on August 5th in Mauritius off Africa’s east coast, were on two-hour rotating sleep cycles. When they weren’t rowing or resting, they were attending to boat matters and trying to make up for their huge calorie deficits with 6,000-7,000 calories a day of dehydrated meals, chocolate, trail mix and other snacks.

Chaya has been decorated with the National Order of the Cedars twice by the President of the Republic and is generally considered a national hero for raising Lebanon’s flag across the world’s highest mountain peaks and being the first Lebanese to climb Mount Everest, ski to both Poles and row an ocean.