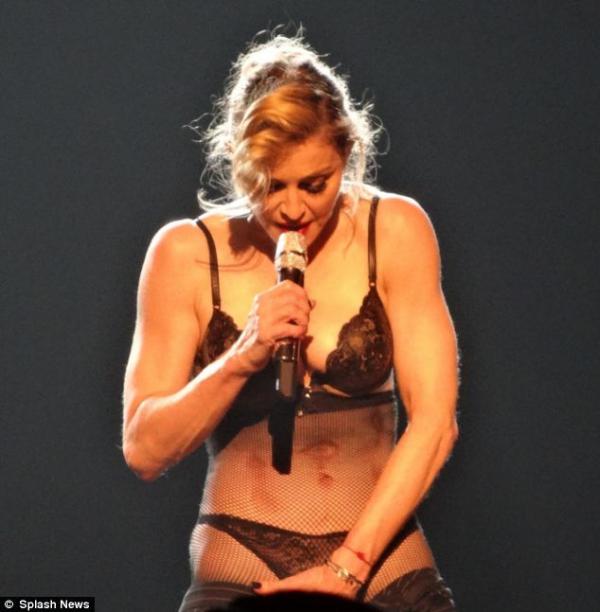 As if she needed an excuse to take her clothes off, this time Madonna stripped for Malala Yousafzai – the Pakistani girl who was shot twice in the head by a Taliban thug.

Madonna took a break from stripping on stage for her fans’ cheers on her “MDNA” tour to baring her flesh for a cause.

The Material Girl addressed the plight of 14-year-old Malala Yousafzai – the Pakistani girl who was shot twice in the head by a Taliban thug for being an activist for women’s education – during her concert Wednesday night at Los Angeles’ Staples Center.

Then the 53-year-old pop-star put an exclamation point on her political protest by dedicating an on-stage strip tease to the girl, according to the Hollywood Reporter.

“This made me cry,” Madonna told the crowd, “The 14-year-old Pakistani girl who was shot on a schoolbus for writing a blog about how important education was to her. The Taliban stopped her bus and shot her … Do you understand the sickness and absurdity of this?”

She then shouted to the Los Anglinos: “Support education! Support the people who support women!”

That message wasn’t enough, however, for Madonna.

Later in the show, she dedicated her song, “Human Nature” to the young Pakistani hero – but not before stripping down into a black bra and panties.

Turning around, she revealed the name “Malala” scrawled across her back, NBC’s “Today” reported.

The political protest though was seen as a naked publicity stunt by detractors.

“Get it Right: Associating #Madonna with #Malala IS DISRESPECT TO #Malala!!! Plz. Give #Malala a rest!” tweeted @OHPakistan to NBC News.

While Madonna was peeling out of her costume Wednesday, Yousifazi was in critical condition fighting for her life. She had started her defiance against the Taliban, who controlled the Swat Valley at the time with rampant beheadings, at the ripe old age of 11, writing a blog under a pen name for the BBC.

Since the Taliban were driven out of rule in the region by the Pakistani military, Malala came forward as a symbol of women’s rights and won a national peace award.