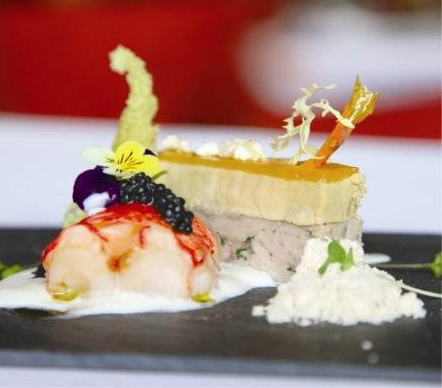 The Gastronomic event will take place on June 22nd till June 25th at La Manche Restaurant, Burotec Bldg, Pasteur St, Saifi, Beirut. It will last four days, with up to 60 people accommodated daily. The Chef’s tasting menu features six course, personally prepared and wine paired by owner Dory Masri. Attendance is by invitation only and costs $85 per person.

A tantalizing welcome addition to Beirut’s burgeoning molecular cuisine scene, La Manche poses the question: just how does one deconstruct a Spanish tortilla?  The answer is, with mind-blowing flair and originality. Served in a glass, with caramelized onion, chorizo scented sabayon and carbonated mashed potato – this is still a traditional Spanish dish, with hints of NASA.  But don’t try this at home kids – award winning chef Dory Masri and Gordon Ramsay protégé spent years studying and experimenting with the molecular make up of foods. Don’t leave without trying the Cinnamon and Vanilla scented Apple Crumble, Apple Beer, and Apple Caviar.

Chef Dory’s work in Jerez and Seville, the numerous awards gained there, and the Spanish embassy’s patronage, inspired his extensive travels. His love of the country comes across in La Manche’s menu, which comprises gastronomic modern French and European cuisine with a molecular twist.

But before Spain, Chef Dory had the pleasure of working with the world-renowned Chef Gordon Ramsay at the possibly even more famed Connaught Hotel in London. Ramsay’s passion found a kindred spirit in Dory, challenging him to exceed his own wildest expectations. Soon Chef Dory realized it was time to come home and apply that passion to his own project and bring with him the latest techniques in molecular cuisine.

“Molecular cuisine, in the pure sense, is a combination of science and food. This term has also come to describe a style of cooking that creative and forward-thinking chefs have developed using advances in science, technology, and even psychology.  This new style challenges your food and science knowledge as a cook, and your physical senses and mental perception as a consumer,” explains Chef Dory.