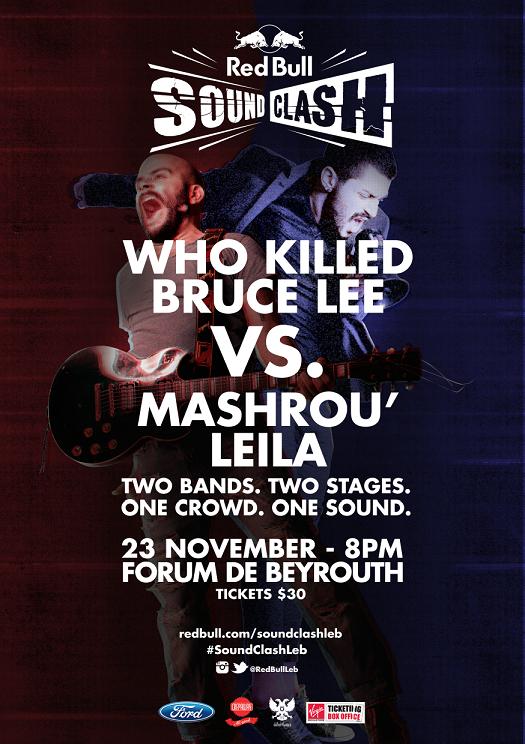 This Saturday November 23rd, around 3,000 spectators will gather at Forum de Beyrouth to witness a unique musical showdown that will bring Mashrou’ Leila and Who Killed Bruce Lee, under one roof. Red Bull SoundClash will feature the two bands who have different sounds, styles and influences, with the aim to give their best to music lovers.

SoundClash’s roots originated in Jamaica, where reggae sound systems and dub musicians have been jamming together as well as challenging each other in spontaneous shows in bars, clubs, and even open market places. Red Bull picked up this tradition and created a new live music show format that targets music lovers everywhere.

The event aims at supporting Lebanon’s local talent, through showcasing unique skills and captivating performances by bands that rose to fame from the country’s underground music scene.

Mashrou’ Leila, a five-member band born of a nocturnal encounter at the American University of Beirut in 2008, fuses the craftiness of a music workshop with the punch of stadium rock. With their distinct approach to storytelling and orchestration, they have crafted some of the most melancholic ballads and raucous anthems in contemporary alternative Arabic music.

Established in 2010, Who Killed Bruce Lee’s band members got together and created one of the tightest, musically rich, and innovative groups in Lebanon’s local music scene. Playing the best of indie, electro, rock n’ roll, and more, they provided audiences with a chance to sing along, dance and get wild as they blasted out those tunes loud and strong.

The event opens at 8pm local time, and takes place in partnership with Ford, Crepaway, überhaus, and Virgin Ticketing Box Office, where event tickets are sold.

It all starts with the warm-up session, where each band will perform three songs, to give the audience a foretaste of the show.

After the contest kicks off, the bands will take opposing stages. In The Cover, both bands will be covering the same song in their own personal style.

Then there’s The Takeover, where both bands will finish the second half of a song started by the opposing band in their own styles.

The musical battle heats up in The Clash, with each band performing its own songs in three different styles, adding a twist to one of the most electrifying rounds. At this point of the ‘clash’, expect the unexpected!

Then we get to The Wild Card, where Mashrou’ Leila and Who Killed Bruce Lee both invite special guests to perform with them on stage, only to galvanize the audience, as the wild card can possibly be a band, a singer or a dancer, with Western or Eastern influences. All options are open in this unprecedented battle in Lebanon!