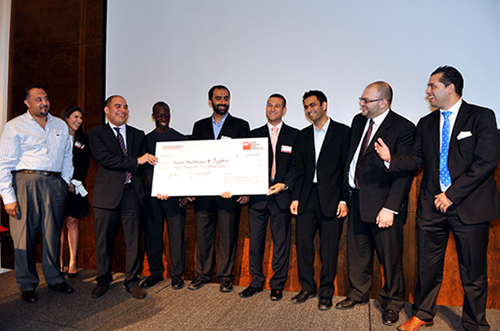 Some of the Middle East and North Africa’s most promising entrepreneurs are to be recognized in Cairo on Friday, 4 June when The Massachusetts Institute of Technology (MIT) Enterprise Forum of the Arab Region awards the winners of the MIT Arab Business Plan Competition, held in partnership with by Abdul Latif Jameel (ALJ) Company.

This year, nine finalist teams are from Lebanon, Egypt, Palestine, Yemen and the UAE made up a shortlist from a record total of 1,852 applications across 13 Arab countries. Presenting their most compelling business ideas to a jury comprised of some of the Middle East’s leading decision-makers, the nine rising entrepreneurial teams are competing for start-up seed money equaling USD $65,000 as well as receiving mentoring support from successful business leaders and consultants.

This year has seen three of the MIT Arab Business Plan Competition finalists from Lebanon, including team working on a dental solution that allows dentists and dental labs to collaborate fully in a redesigned shading process and a team that introduced an organic product that is made from leaves and woods chips that will be recycled instead of thrown away and a group offering an after-school edutainment center which introduces kids and teens to pre-engineering courses.

“Given the current economic climate globally, the Arab world has never been more in need of entrepreneurial talent to lift its competitiveness and financial prospects” said Mr. Fadi Jameel, representative of ALJ Company Chairman of Abdul Latif Jameel Foundation. “The diversity, professionalism, and comprehensive nature of the applications sent for this year’s MIT Arab Business Plan Competition demonstrates that there is real business innovation and drive to be found in the current generation of young Arabs,” said Mrs. Hala Fadel, Chair of the MIT Enterprise Forum of the Pan Arab region.

Entries received from entrepreneurial teams in Lebanon, Egypt, Yemen, Palestine and the United Arab Emirates included detailed business plans for new businesses to be launched in the areas of energy, engineering, healthcare, internet-based business solutions, software, and telecoms. Each of the nine teams competing will spend 3 June with global consulting firm Booz & Co to hone their pitches before the final oral presentations on 4 June in Cairo. Jurists including Fadi Ghandour, CEO of Aramex in Jordan and Samer Kanachet, Chief Operating Officer of KIPCO in Kuwait will select the top 3 winning teams, who will then be recognized at a gala awards ceremony that evening.

The winning team receives a $50,000 stipend as seed money to launch its business plan, with $10,000 going to the first runner-up and $5,000 to the second runner-up as initial start-up funding.

Abdul Latif Jameel Co. has committed to supporting the MIT Arab Business Plan Competition as a key partner during the next five years to ensure the initiative’s sustainability and progress.