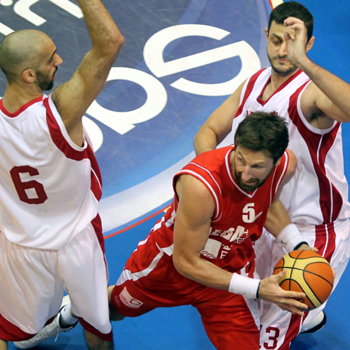 Lebanon and Jordan fought a the battle of FIBA Asia teams bound for the 2010 FIBA World Championship before the former prevailed by the skin of their teeth in front of a packed and partisan crowd on Tuesday.

Lebanon’s 63-54 win put them as only the second team – after GCC champions Qatar – to win all their three games so far in the competition. Lebanon and Qatar will face off on the night of morrow to decide who will finish on top of Group B.

Jordan are exactly at the other end of spectrum having lost all their three games, needing a win against another WABA team Syria on Wednesday to qualify to the quarterfinals.

Lebanon’s win also avenged the twin loss they suffered in the previous two meetings – both coming at the 25th FIBA Asia Championship at Tianjin last year, where Jordan won the bronze medal to qualify for the 2010 FIBA World Championship.

Lebanon subsequently were awarded a wildcard entry to the 2010 FIBA World Championship.

Jackson Vroman – double-teamed by Zaid Alkhas (right) and Zaid Abbas in the picture above – led the scoring for the hosts with a 20-point haul.

Fadi El Khatib played only 18:48, but each of them especially in the second half was very effective. El Khatib scored 13 points.

“Fadi is coming around, although he is yet to get into full rhythm with the team,” Lebanon coach Tab Baldwin said.

“He’s having to think before execution, but the way he is going I think he is doing alright,” Baldwin added.

From an even position at the half-time break, when the 31-31 scoreboard reflected the exchanges on court, Lebanon gradually increased their stranglehold on the game.

El Khatib started the game but was rested after 3:18 in the first quarter. His reinduction at the start of the third quarter added momentum to the Lebanese offense.

The 31-year-old scored six points, but drew more attention towards himself, facilitating smoother flow of his team’s plays.

Vroman scored five and rallied the others for an all-round show as Lebanon outscored their rivals 17-9 over ten minutes to take charge of the proceedings. 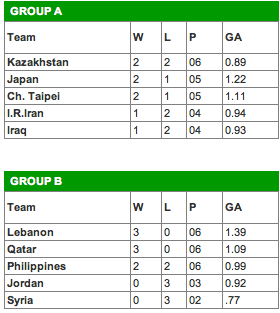 Newer Post Captain America to be shot in Manchester city in September
Older PostHow to approach a Girl in a Night Club….