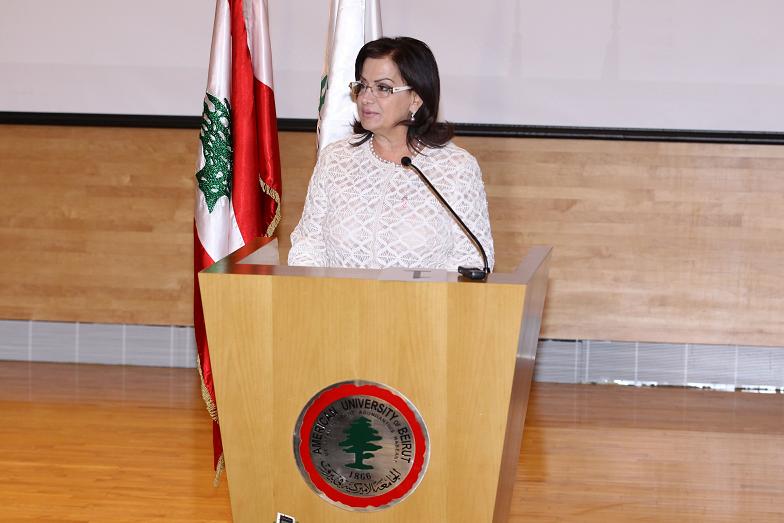 Under the high patronage and presence of the Lebanese First Lady Mrs. Wafaa Sleiman, the Ministry of Public Health launched the 2013 National Breast Cancer Awareness campaign from a live ‘Human pink Ribbon’ to visually remind women of the importance of early detection of breast cancer through screening. The event was organized in coordination with the Breast Center of Excellence at Naef K. Bassile Cancer Institute of the American University of Beirut Medical Center (AUBMC), the Lebanese Breast Cancer Foundation and the collaboration of Roche Lebanon.

The ribbon was formed with the participation of the First Lady of Lebanon, the Minister of Public Health, Mrs. Lama Salam, a number of current and former Ministers and Deputies, and the Dean of Medical Faculty at the American University of Beirut, along with the National Breast Cancer Committee, breast cancer survivors, universities and school teams who all dressed up in pink to pay tribute to the international symbol of breast cancer awareness.

Mrs. Wafaa Sleiman invited all women to conduct necessary tests for early detection of any possible cancer: “Breast cancer is the most common form of cancers among women but above all it is a disease that can be defeated.” The First Lady stressed on the objectives of the awareness campaign starting with spreading information, facilitating the disease diagnosis and securing treatments without any financial barriers.

In turn, the Minister of Health Mr. Ali Hassan Khalil emphasized on awareness-building and early detection to enhance the effectiveness of treatment and eventually reduce the healthcare cost: “We envision a day when cancer is no longer a deadly disease. This nationwide campaign is very important to us, as it spreads the powerful message that early detection can save lives.”  As for supporting the Human Pink Ribbon initiative, he added: “it is a wonderful and tangible sign of the Lebanese community support of the breast cancer awareness campaign message which is to encourage more women to be vigilant and proactive towards their own health.”

Abed Al Rahman Sabra, Country Manager of Roche Lebanon stressed on the importance of educating and empowering women to take care of their own health: “Roche has been recognized worldwide as a pioneer in the battle against breast cancer through its continuous research in this field in order to lessen the burden on patients. During the month of October and since 2002, Roche Lebanon has committed to the national breast cancer awareness campaign and to its community to continue with the spread of the message of ‘Early detection saves lives’ and incite women to take necessary action towards improving their own health.” 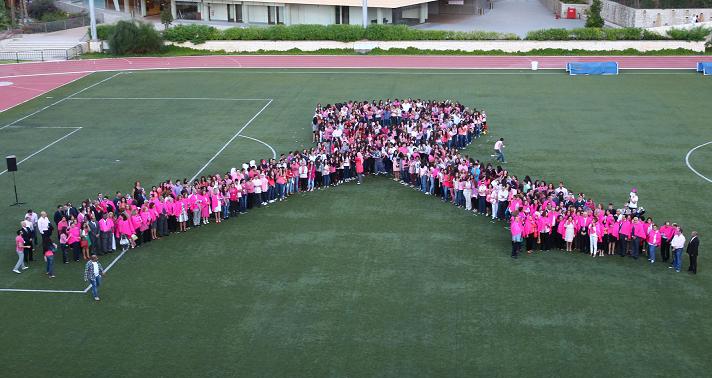 Professor Nagi El-Saghir, Director of Breast Center AUBMC and President Lebanese Breast Cancer Foundation: “The Breast Center of the American University of Beirut Medical Center and the Lebanese Breast Cancer Foundation worked very hard with the National Breast Cancer Awareness Campaign to ensure that the Human Pink Ribbon boosts Awareness and Early Detection of breast cancer. Diagnosis of breast cancer at early stages results in cures in over 90% of cases, and cure is here achieved without need of total surgical removal of the breast or total removal of lymph nodes under the armpit. Early breast cancer is becoming curable with partial breast and axillary surgery, short duration radiation therapy and less chemotherapy. Hormonal and targeted therapies are contributing to the increase in the rates of cure as well.”

The nation-wide awareness campaign is set to run for three months enabling women to gain access to discounted mammography exams which will remain available till the end of December 2013. Participating private hospitals and medical centers across Lebanon will reduce their mammography fees to L.L. 40,000 whilst government hospitals will offer free mammograms during the entire phase of the campaign.

To expand the outreach of the core awareness message to a wider target audience and impact more lives, the national committee of experts announced that the annual national program will involve more public lectures which will be organized in collaboration with the municipalities and women NGOs, and run by the medical societies and the cancer patient support groups.

The campaign will also be promoted through various media outlets including links on leading Lebanese online portals and news sites, through educational newsletters. Finally, special thanks go to the journalists and representatives of all the media for their continuous support to this national campaign in order to help deliver its message and spread awareness about the importance of breast cancer early detection.

In order to enhance awareness, the 1214 hotline will be available throughout the campaign phase to answer basic questions related to the campaign, and to direct ladies to the nearest mammography center.