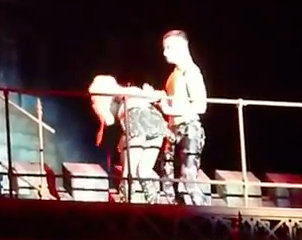 Lady Gaga put Justin Bieber to shame this weekend … barfing MULTIPLE TIMES on stage during a concert in Spain …. WITHOUT MISSING A STEP!!!!

Gaga was in the middle of her hit “Edge of Glory,” when she bends over with her back to the stage and starts blowin’ chunks … and then immediately pulls herself together and starts dancing again!

Seconds later, she bends over again and pukes again … and then a 3rd time … before stepping right back into her routine like nothing happened.

After the show, Gaga tweeted about the vomit-athon … even posting a link to the clip with the line, “Was praying nobody saw but actually its quite a good laugh if u need one!”

Sources close to Gaga told TMZ … Gaga had been suffering from the flu before the show … but didn’t want to cancel the show … ’cause she’s a badass.

We’re told Gaga has since recovered from the illness and is now doing fine.