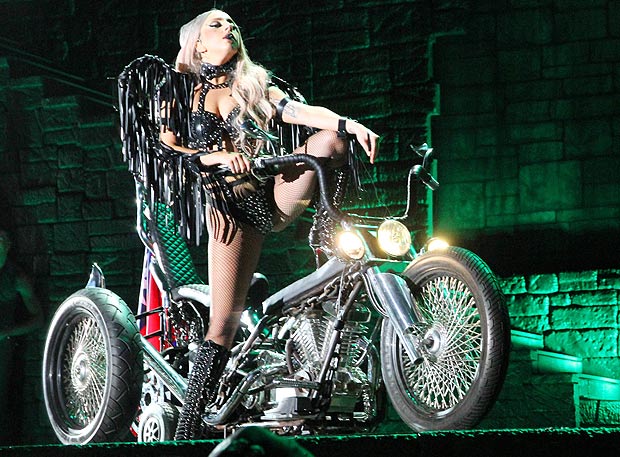 Lady Gaga today risked the wrath of magazine mogul Anna Wintour by leaking her inside photo of the latest Vogue mag before its release.

The shot for the September issue – which reveals the singer, 26, butt-naked apart from a gigantic pink hat – was supposed to be kept under wraps until the issue hits the newsstands next Tuesday.

But the Poker Face popstar posted the snap today along with the magazine’s cover on her social networking site LittleMonsters.com

Although Gaga is fully clothed in the edition’s cover, the image of the celeb who loves to shock is just as striking.

The images have been retweeted more than 6,000 times together.

The singer had taken to her Twitter page two days earlier to tell fans she wanted to give them a sneak peek of the snaps, writing: “Don’t worry I’ve been txting Wintour all morning trying to get that cover, queens. next I’m sending bagels to VOGUE (complex carbohydrate water)”.

The following day, she tweeted, “AHHH! The Vogue Express dropped off the SEPTEMBER ISSUE yesterday morning. IM A COVER GIRL, and ITS FAB! Can’t wait to show u tonight!”

When the Bad Romance hitmaker finally made the big reveal it was accompanied by an apology to Vogue’s editor Wintour, writing: “SHH DON’T TELL TWITTER/ SEPT ISSUE OF VOGUE MAGAZINE/ Sorry Anna but the underground kids deserve it. Bisous!”

The decision to take on Wintour is pretty gutsy since the 62-year-old fashion designer is known for volatile outbursts of displeasure and has been given the nickname Nuclear Wintour.

Meanwhile, Lady Gaga has revealed that despite her global fame she “can still have sex on a beach”.

Newer Post Who is Better: Justin Bieber or Conor Maynard?
Older PostBeirut from the Sea- The Essence of Charm